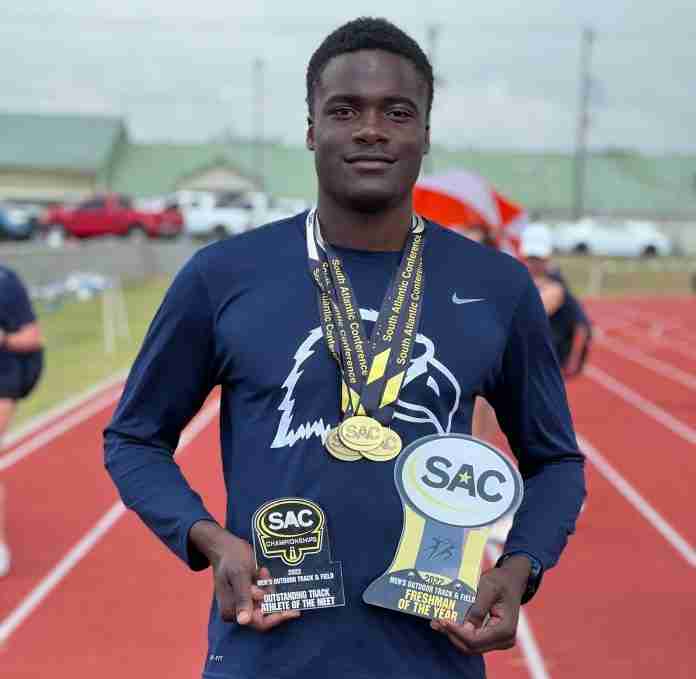 Anderson, South Carolina – Hauling in three gold medals, Makanakaishe Charamba (pictured) was named the 2022 SAC Men’s Track & Field Freshman of the Year and the 2022 SAC Outdoor Championship Athlete of the Meet on the final day of the championship event.

The Carson-Newman University men’s sprints team started the day strong, sweeping the podium in the finals of the 100-meter run. Charamba won the conference championship with a time of 10.36 seconds. That is a new personal best for the freshman and moves Charamba past David Morgan of Angelo State for 14th fastest in Division-II.

His teammate Siphosethu Boya finished second to earn the silver medal with a time of 10.41 seconds. Rounding out the perfect sweep for Carson-Newman was PJ Lotharp finishing third, also with a time of 10.41 seconds. That time is an NCAA provisional mark and moves Lotharp into a tie with fellow Eagle Devon Moore and Braylen Brewer of Pittsburg State for the 20th fastest time in Division-II.

Chramba’s day wasn’t done, as the Harare, Zimbabwe native won the gold medal in the 200-meter run with a time of 21.02 seconds. Charamba has now won eleven straight finals races combined between the 100-meter, 200-meter and 4×100 meter relay races.

“Maka is a clear talent,” says Director of Track & Field and Cross Country David Needs “He is one of the best in the nation and it showed this week. Not only does he compete, but he supports his teammates. He went and ran the 200 meter and then went and watched Tray throw the discus because he wanted to support him. Those are the kind of kids you want on your team.”

👏 Athlete of the meet
🏆 Freshman of the Year
🥇Three gold medals

“We had an amazing weekend,” says Needs. “All of our coaches did a great job getting our kids ready to compete and be succesful and Kelly Brock keeps us all together on the training side. This was a tough meet with top talent and our guys pushed forward against guys they’ll see again at the NCAA Championships. We also had a lot of kids go out and set personal bests, and then kids like Sydney McCarty and Nathalie Schumacher who were warriors all weekend and participated in multiple events to the best of their ability. Now we have a group that is focussing on getting to the national championships and doing well there.”

The Eagles will wrap up the season at the Lee Last Chance Meet on Saturday, May 14. Fans can follow along with updates at cneagles.com.