England-based Zimbabwean rugby star Dave Ewers may have set the Heineken Champions Cup alight with his excellent performances for Exeter Chiefs but insists there is still a lot to be done as he seeks his second European medal inside three seasons.

Harare-born Ewers has been in outstanding form so far in the Champions Cup, scoring a try in each of Exeter’s two games, as well as being named the player of the match in both games.

His brilliant individual performances have helped Chiefs pick up bonus point wins over Castres and the Vodacom Bulls which leaves them sitting pretty in Pool A behind leaders Leinster.

However, with return legs against both teams set to come next month, Ewers knows tougher tests lie ahead.

“We’re happy with where we are, it’s been two good wins for us,” said the imposing back-row forward.

“That said, the job’s not done yet. Going away to Loftus Versfeld, it’s going to be a massive occasion as is when Castres come back here. European games are always tough and these will be no different.” 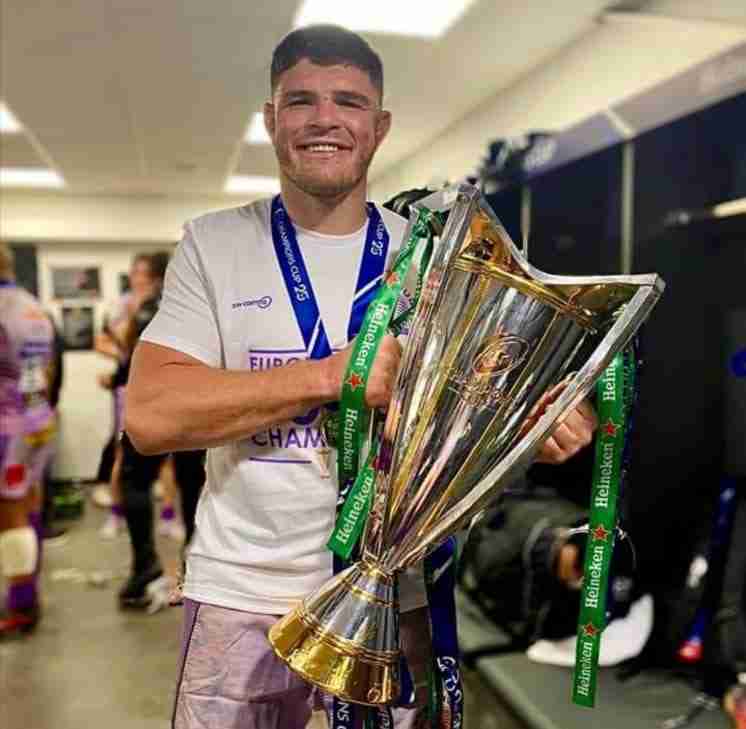 Dave Ewers with the Heineken European Champions Cup two years agoSaturday’s success over the Bulls ensured a 12th win in 13 on home soil for the Chiefs in European action and Ewers says he and his teammates should make the most of their home advantagen.

“We take real pride in our record here,” said Ewers at the final whistle. “As a team, we love playing at home and we want to make this place a real fortress for us – a tough place to come for opposition. Today, we did that and we’re happy with the result.”

A powerful first-half performance set the tone for Exeter’s latest European win against the Bulls, who are one of three South African sides making their debut in the competition this season.

“We had talked all week about concentrating mainly on ourselves,” he said. “Like any South African side, we knew they would be physical and they were just that. The good thing was we stuck to our jobs and we were able to get the job done.”

The Chiefs and the Bulls will lock horns again in Pretoria on January 14, before Castres visit Sandy Park a week later.

Born and initially raised in Zimbabwe, Ewers was part of Exeter’s Academy system at Ivybridge Community College after his family moved to the United Kingdom.

A destructive force even at an early age, Ewers made his Chiefs debut in 2009, featuring in a British & Irish Cup clash away to Newport.

Although injuries have at times hampered his development, Ewers has amassed over 200 first team appearances for the Chiefs, whilst his on-field form has seen him get recognised with appearances for the England Saxons, as well as a first call-up to the senior training squad in February 2016.

Ewers played a leading role in helping the Chiefs record a historic Premiership and Champions Cup double in 2020, but was ruled out of helping the Devonians defend their English title in 2021 when he picked up a suspension for a high tackle in the final game of the regular season against Sale Sharks.

Only long-serving prop Ben Moon has been at the club longer than the popular Zimbabwean.