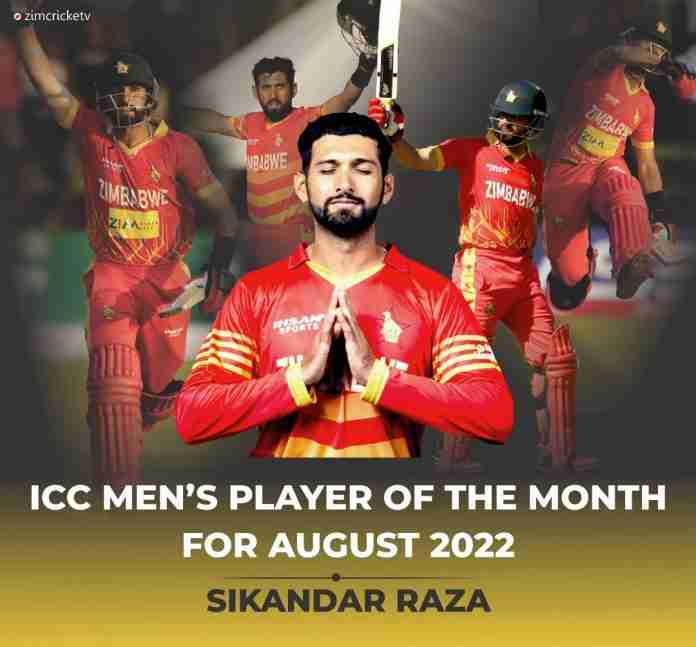 Zimbabwe all-rounder Sikandar Raza scripted history, becoming the first player from his country to win the ICC Men’s Player of the Month award for August.

Sikandar Raza defeated England star all-rounder Ben Stokes and New Zealand’s Mitchell Santner to claim the honours with his three ODI centuries during the month.
“I’m incredibly humbled and honoured to have won the player of the month award from the ICC more humbling that I’m the first Zimbabwean to ever win such an award,” Raza told the ICC.
“I would like to thank everybody who has been in the changeroom with me over the past three to four months that goes out to the technical staff and to the players. Without you guys this would not have been possible.
“Lastly, I would like to take this opportunity to thank all the fans in Zimbabwe and overseas for all your prayers, for all your wishes…they were well received and I’m forever grateful.”
The 36-year-old Raza’s first hundred in the month of August came against Bangladesh. The right-hander played an unbeaten knock of 135 at the start of the month. He came in at a time when Zimbabwe were in trouble at 62/3 while chasing 304.
Raza and his teammate Innocent Kaia stitched a crucial 192-run partnership for the fourth wicket. Raza, the more aggressive among the two, batted till the end, scoring 135 off 109 balls as Zimbabwe defeated Bangladesh by five wickets in the first ODI.
Raza carried his form in the next match with his 117 not out off 127 balls, which helped Zimbabwe secure the three-match ODI series against Bangladesh before the series ended in 2-1.
The veteran all-rounder Raza almost pulled it off for Zimbabwe in the third and final ODI match against India.
But unlike the two games against Bangladesh, he didn’t get support from the other end. With 15 runs needed, Raza departed for 115 runs in the penultimate over. Zimbabwe fell short by 13 runs and India completed the clean sweep 3-0.
— ENDS —