The 29-year-old inside centre has earned 14 Test caps for the Sables – the last coming during the recent Rugby Africa Cup in France which doubled as the qualifiers for next year’s Rugby World Cup.

He also featured prominently for the Goshawks during their maiden campaign in the Currie Cup First Division.

A dazzling runner and entertainer in open play, Chieza impressed in Currie Cup and the recent Rugby Africa Cup with his ball-carrying ability.

His ability to break up opposition play with his defensive reads and line speed have also become key assets for the national team. 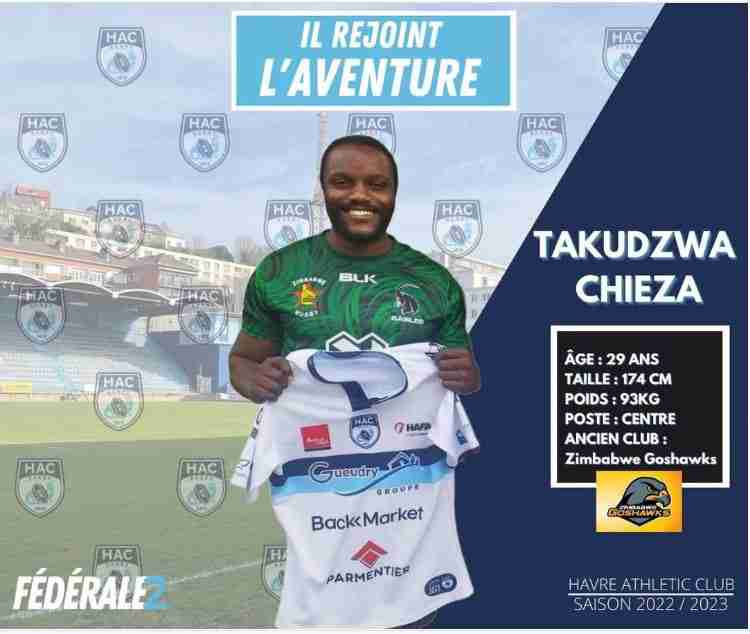 Le Havre Athletic Club confirmed Chieza’s arrival in a statement on their official website on Sunday.

“Le Havre Athletic Club (HAC Rugby) is pleased to formalize the arrival of its new player Takudzwa Chieza. The 29-years old Zimbabwe and Goshawks player joins our sky and navy for this new season,” the club said.

Chieza joins Le Havre after a stint at South African club False Bay at the start of the year.

The former Kyle College and Prince Edward School pupil will be aiming to make an instant impact at Le Havre Athletic Club, who compete in the Fédérale 2, which is the fourth-tier rugby union club championship division in France.

He becomes the latest Zimbabwe rugby international to move to France after his Sables teammate Bornwell Gwinji, who completed a move to the third-tier club Stade Dijonnais Rugby on Friday.