Junior golf starlet Keegan Shutt warmed up for his participation at next month R&A Junior Open in style after cruising to a dominant 13-shot victory in the Midlands Amateur Golf Championship at Kwekwe Golf Club on Sunday.

The 15-year-old rising star completely dominated the field as he carded identical scores of 69 on Saturday before closing with a 71 on the final day for an impressive 54-hole total of 209.

It was Shutt’s second title on the Zimbabwe Golf Association (ZGA) amateur circuit this season after winning the Harare Amateur Championship at Police Golf Club in April.

More importantly the gifted junior golfer appears to be hitting some good form at the right time ahead of his participation at the R&A Junior Open Championship to be staged at Monifieth Golf Links in Scotland from July 11-13.

“My preparations for the Junior Open are going well, I’m just trying to practice a lot because I’ve been struggling lately after the Zimbabwe Junior Open but I’ve worked hard on my game and getting much better,” Shutt told Zim Sport Live ahead of the Midlands Amateur Championship.

“I hope I will do well at the Junior Open, its good learning experience. I played at St Andrews in 2018 and managed to make the cut there so my target is to make the cut again but I’ve got to take it step by step and see what happens,” he said.

Shutt was simply in a class of his own during the Midlands Amateur Championship, finishing 13 shots clear of second-placed Michael Wallace, who won the Chapman Grand Slam recently.

Wallace kept in touch with the eventual winner on the first day after carding 70 and 72 in the opening two rounds but eventually settled for second position after carding 80 on the final day.

The Royal Harare Golf Club golfer finished a shot clear of Wingate Golf Club’s Munashe Ndaruza, who was third after carding round of 73, 76 and 74 for a 54-hole gross of 223.

A strong field of some of the country’s leading amateur golfers drawn from clubs around the country took part in the Midlands Amateur Championship.

The tournament also carried crucial ZGA Order of Merit points which would be used for selection into the national team for regional and international team competitions such as the All Africa Amateur Golf Team Championships and the Eisenhower Trophy.

The next event on the local circuit will be the Zimbabwe Amateur Golf Championship at Triangle at Hippo Valley Golf Club from July 1 to 3. 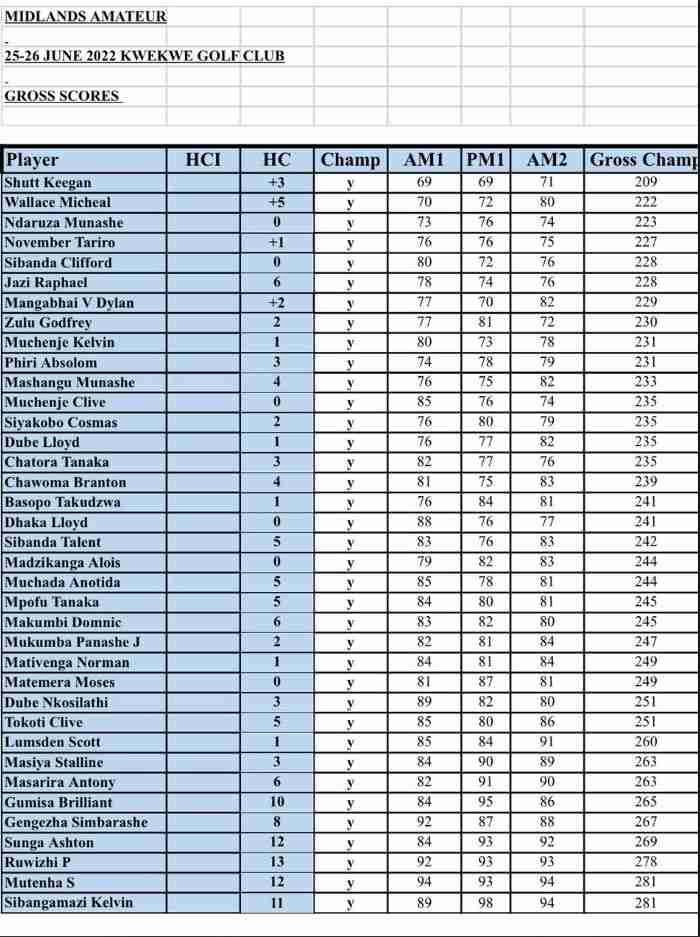