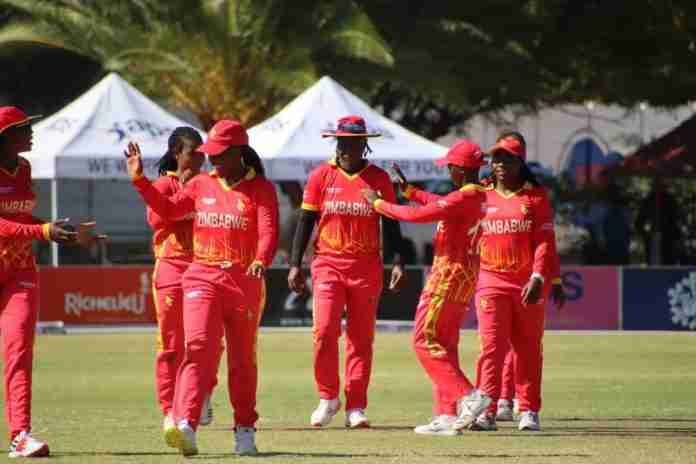 Left-arm seamer Nomvelo Sibanda took a memorable hat trick as Zimbabwe cruised to a comprehensive seven-wicket victory against Namibia to clinch the Capricorn Women’s Tri-Nations in Windhoek on Tuesday.

Sibanda was named the Player of the Match for her T20 career-best bowling figures of five wickets for 14 runs which included a phenomenal hat-trick in her first overs which held Zimbabwe dismiss Namibia for a meagre 70 runs in 13,3 overs.

In reply, Zimbabwe needed just 9,1 overs to reach 76 for three and claim the title in the women’s triangular series which also featured Uganda.

The win capped off a very successful tour by the Lady Chevrons, who recovered from a loss in their first match against the hosts to completely dominate the competition with five convincing wins in their six matches.

After sending Namibia in to bat, Zimbabwe got off to a sensational start as Nomvelo Sibanda claimed a hat-trick in the second over to leave Namibia reeling with three wickets down and only two runs on the board.

The Zimbabwe bowlers demolished the Namibia batters completely to win the title by 7⃣ wickets.

Opener Edelle van Zyl gave Namibia hope with a few boundaries, but the wickets continued to fall all around her.

Sibanda was the stand-out bowler, taking five wickets for 14 runs, while Precious Marange took two for 16 and Anesu Mushangwe with finishing with two wickets for eight runs.

Chasing just 71 to win, Zimbabwe lost Sharne Mayers in the very first over but an early setback didn’t affect Kelis Ndlovu, who followed up on her maiden half-century in the previous match with another solid innings.

Ndlovu dominated the Namibia bowlers and took a lot of pressure off Chipo Mugeri-Tiripano, who was struggling a bit to put bat to ball.

She top-scored for Zimbabwe with (33 runs off 21 balls) to lead them within touching distance of the win before mistiming a flick shot which was safely grabbed by er dismissal in the seventh over.

Captain Musonda finished the game in fine style as she hit a six on the first ball of the tenth over to help Zimbabwe bag the silverware by seven wickets.

Mugeri-Tiripano finished as the leading run-scorer in the tri-series with 172 runs from five matches at an average of 43 while Ndlovu came a close second with 146 runs from seven matches.

Mushangwe was the second-highest wicket-taker with 10 scalps from seven matches, behind Uganda’s Janet Mbabazi, who claimed 11 wickets from five matches.