The two players could not be separated in regulation play after finishing in a tie for top position on the leaderboard on a 54-hole total of one-over-par 217.

During the sudden-death playoff to decide the winner, Wemba sank an eagle on the first playoff hole while Mketekete managed a birdie.

With the victory, Wemba earned US$ 1000 while Mketekete claimed US$850.

In addition to Mketekete, Zimbabwe was also represented in the field by local pros Visitor Mapwanya and Arnold Burasho who finished tied for fourth and solo eighth respectively.

The amateur trophy was also decided after a playoff with Zambia’s Chongo Kasongole outlasting his compatriot Wellington Wemba after three extra holes.

Chevron Tour founder Tafadzwa Makadzange-Chigumira hailed the success of the inaugural event which featured a host of professional and amateur golfers from Zimbabwe, Zambia and Malawi.

“It was a wonderful tournament, the players that came through were among the best from their countries and they acquitted themselves excellently, we could not have asked for a better tournament. It was excitement and adrenalin all the way through through to the final round and the playoffs for both the professionals and amateurs,” Makadzange-Chigumira said.

The former Zimbabwe Women’s Rugby chairperson also thanked sponsors and stakeholders who contributed in making the Rozwi Classic a success.

“As the Chevron Tour we could not have asked for a better and we look forward to the same players and new players joining us and finding out how good they are against their peers. The course looked beautiful, Bonanza Golf Course went above and beyond to host us. The pin placements really challenged the players apart from the weather and the conditions and the guys came out and gave us a good show.

She added: “We would really like to thank our partners The Big Tree Trade Kings, Roman’s Pizza and other well-wishers who have really supported this inaugural tournament and the beginning of the Chevron Tour. We cannot do this on our own, we cannot grow the game on our own, we are a part of a system and we want to grow not only the players but that entire system.”

The newly established Chevron Golf Tour has positioned itself as a tailor-made gateway for professionals and elite junior and amateur golfers aspiring to join the pro ranks.

The inaugural Chevron Golf Tour season boasts of a packed 2022-2023 schedule of 11 54-hole tournaments from this month to April next year, culminating with the Tour Championship.

After the season-opening Rozwi Classic focus will now shift to the Gokomere Open which has been slated for Chapman Golf Club from July 13 to 15.

The tour boasts a flood of incentives geared to encourage the next wave of professionals from Southern Africa to break onto the big stage.

In addition to providing golfers with the opportunity to compete in professional and pro-am golf tournaments in a structured, growth-oriented tour on a regular basis, the tour will also incorporate other player development activities meant to equip the participants with important life skills such as financial planning, career planning and sports science and nutrition. 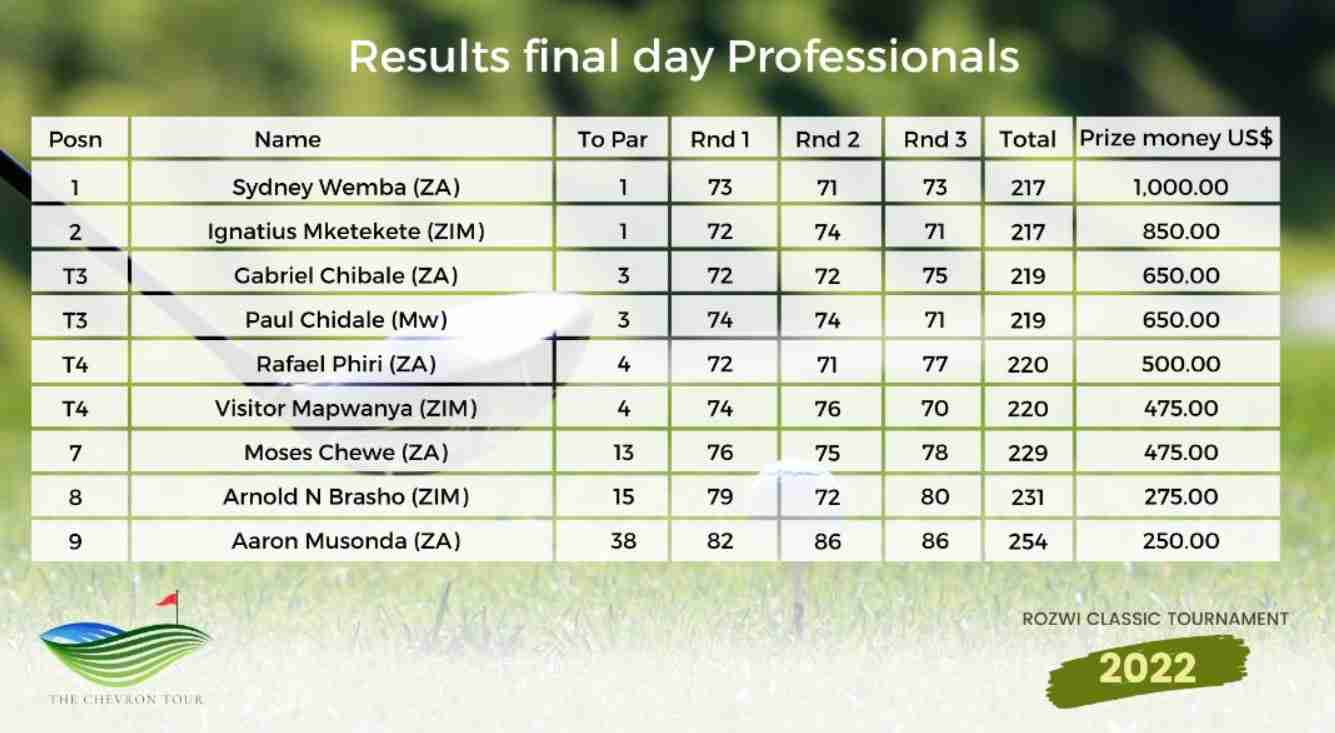