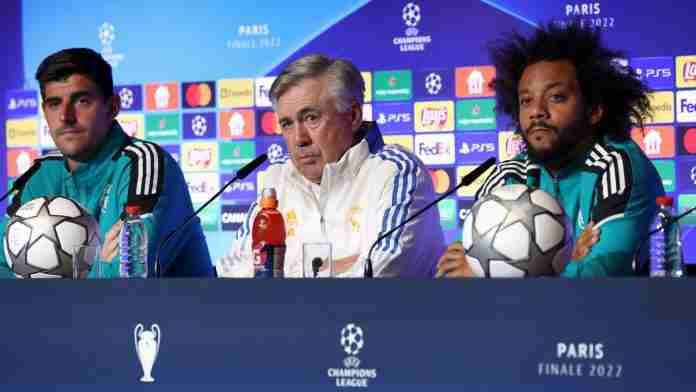 Carlo Ancelotti said Real Madrid are close to achieving “the maximum” this season as they look to beat Liverpool in the Champions League final on Saturday and complete a European-Spanish double.

After winning La Liga last month with four games to spare, Madrid are now in the hunt for their fifth Champions League triumph in nine years in Paris.

It would be only the fifth time in the club’s history Real Madrid have won the Spanish league title and the European Cup in the same season.

Ancelotti has made history himself as the only manager to reach a fifth Champions League final, which seemed unlikely when he was in charge of struggling Everton in the Premier League last season.

“This year feels like a long time, it gives me vertigo thinking about being in this final,” said Ancelotti in a press conference on Friday.

“But I take it in my stride because it’s a success for us. We know the history of this club and to get here is very important, it has been a very good season for us.

“We are very close to achieving the maximum and we will try. This team manages these types of games well. The veterans help the youngsters to play in an atmosphere of calm, enthusiasm and confidence.”

Real Madrid are chasing a record-extending 14th European Cup at the Stade de France and boast an incredible record in European finals, having won all of their last seven.

One of those came against Atletico Madrid in the Champions League final in 2014, when Thibaut Courtois, now Real Madrid’s goalkeeper, was on the losing side.

“We know when Real Madrid play in finals they win them and now I’m on the right side of that,” said Courtois.

Liverpool had a fairly kind route through the knock-out stages, as they defeated Inter Milan, Benfica and then Villarreal to reach the final while Real Madrid had one of the toughest routes possible, as they staged incredible comebacks to beat Paris Saint-Germain, Chelsea and Manchester City.

‘We deserve to reach final’

Ancelotti said Real Madrid’s history has given them an edge in the pressure moments.

“We deserved to reach the final because of quality but also talent is not enough,” said Ancelotti.

“You have to bring everyone’s talent together to make a team that is together and committed. And then as well the history of this club has pushed us in difficult moments. To win we will have to deserve it tomorrow.”

Karim Benzema has also been pivotal to Real Madrid’s progress, the Frenchman scoring 10 times in the knock-out rounds, including three goals against PSG, four against Chelsea and three against City.

The 34-year-old has 15 in the whole competition, putting him only two short of equalling Cristiano Ronaldo’s 17, the record for a player in a single Champions League tournament.

“He pushes the team to victory even when we’re in trouble,” said Courtois. “He never stops running. When we’re being tested, when it’s challenging, we’ve seen what he’s made of this season.”

“He’s a leader in the team,” added Marcelo. “He shows it with his character, his presence.”

Liverpool coach Jurgen Klopp had earlier expressed concern with the pitch for the final, saying the new surface, which was installed on Thursday, is “obviously not the best news for both teams”.

Ancelotti downplayed the issue. “I knew they were going to change it but we haven’t trained there yet,” he said. “I don’t think it will be a problem.”