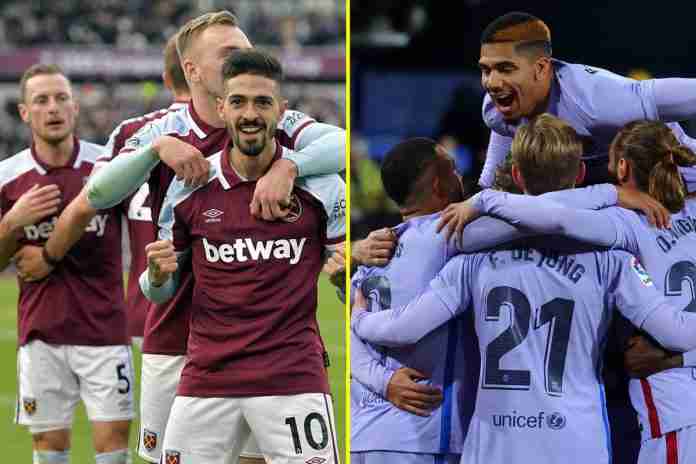 Pierre-Emerick Aubameyang scored the winner as Barcelona fought back from a goal down to beat Galatasaray 2-1 on Thursday to book their spot in the Europa League quarter-finals, while Andriy Yarmolenko scored an extra-time winner as West Ham knocked out Sevilla.

Catch up with all the highlights here.

After a goalless first leg at the Camp Nou last week, Xavi Hernandez’s Barca trailed on aggregate in the last 16 when Marcao headed Galatasaray into a 28th-minute lead on the night in Istanbul.

But 19-year-old midfielder Pedri drew the visitors level before the break.

Aubameyang, a January signing after his contract with Arsenal was ended, tapped in from Frenkie de Jong’s pass to score his seventh goal for the club.

Barcelona will now turn their attentions to this weekend’s Clasico against Real Madrid at the Santiago Bernabeu.

“We played a match of huge personality,” said Xavi. “It was a great performance to fight back on a ground like this against a very good team.”

Xavi’s men sit third in the La Liga table, 15 points behind runaway leaders Real, as they look to qualify for next season’s Champions League.

Ukrainian international Yarmolenko scored for the second time in a week after also netting against Aston Villa at the weekend as West Ham beat record six-time winners Sevilla 2-0 at the London Stadium.

Trailing 1-0 after the first leg, David Moyes’ side levelled the tie in the 39th minute through Tomas Soucek.

The match went to extra time, and Yarmolenko pounced after Pablo Fornals’ shot was saved to send West Ham into the quarters of a major European competition for the first time since 1981.

Yarmolenko was given time off by the club after Russia invaded Ukraine, and he has now scored in both of his appearances since.

“Andriy Yarmolenko is such a lovely guy,” striker Michail Antonio told BT Sport. “I can’t imagine what he’s going through. He’s got a finishing touch now. Hopefully he can keep doing it.”

Rangers reached the last eight for the first time since losing the 2008 UEFA Cup final to Zenit Saint Petersburg despite a 2-1 second-leg loss to Red Star Belgrade in Serbia.

Giovanni van Bronckhorst’s side took a 3-0 lead into the second leg.

The Scottish champions suffered a setback early on when Mirko Ivanic scored, but Ryan Kent all but ended the tie as a contest 11 minutes after the break with an equaliser.

El Fardou Ben’s late penalty gave Red Star the consolation of a win on the day, but Rangers march on and continue their bid for a first European trophy since lifting the 1972 Cup Winners’ Cup.

Elsewhere in the last 16, Atalanta wrapped up a 4-2 aggregate success over Bayer Leverkusen as Jeremie Boga’s injury-time strike secured a 1-0 win in Germany.

Monaco bowed out as Abel Ruiz scored the only goal in the principality for Braga, who progressed 3-1 in the tie.

Lyon booked their place in the next round with a 2-1 aggregate success over Porto, while Eintracht Frankfurt scored in the 121st minute to beat Real Betis in extra time.

Leicester continued their run in the Europa Conference League as they edged out in-form Rennes 3-2 on aggregate despite a 2-1 second-leg defeat.

PSV Eindhoven thrashed FC Copenhagen 4-0 in Denmark after a 4-4 first-leg draw to go through, with Marseille also into the last-eight hat after winning 2-1 at Basel after victory by the same scoreline in the first leg.