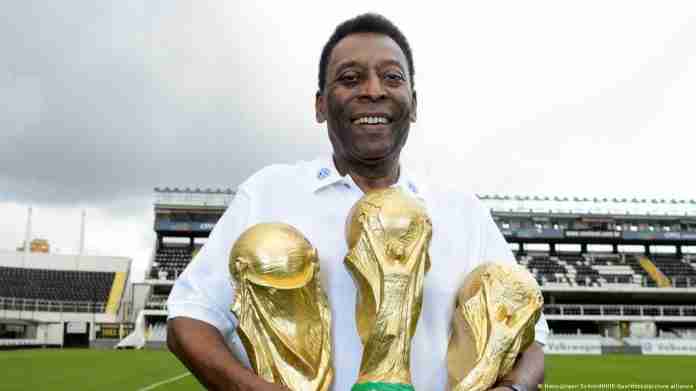 Pele, the magical Brazilian soccer star who rose from barefoot poverty to become one of the greatest and best-known athletes in modern history, died at the age of 82, his daughter said on Instagram on Thursday.

He had been in and out of hospital in recent months after a tumor was found on his colon.

Pele, whose given name was Edson Arantes do Nascimento, scored a world record 1,281 goals, and is the only player ever to win the World Cup three times.

With sublime skills and a winning smile, he helped make soccer the world’s most popular sport and he charmed popes, presidents and Hollywood stars in a seven-decade career as player and ambassador for the sport.

Born on Oct. 23, 1940, in the small Minas Gerais town of Tres Corações, or “Three Hearts”, Edson Arantes do Nascimento learned the game from his father, a semi-professional player whose promising career was derailed by a knee injury.

Several aspects of his youth are obscured by myth, including the origin of his famous nickname. As Pele (sometimes) told it, he often played as goalkeeper in neighborhood games, and kids began comparing him to a local player named “Bile” – and the letters got twisted over the years.

Whatever the truth, he was soon dazzling scouts not as a goalkeeper but as an attacking forward – a prototype number 10.

He was respected for his range of talents, and more so than any player since, he could do it all: He was two-footed, had tremendous pace and stamina, he could head, pass, tackle – and of course, he could score goals.

He joined Santos at the age of 15 and turned the small coastal club into one of the most famous names in football.

Over a glittering 18-year spell at the club he won every honor in Brazilian football as well as two Copa Libertadores – the South American equivalent of the Champions League – and two Intercontinental Cups, the annual tournament held between the best teams in Europe and South America.

His talent was soon recognized by the national team and he was chosen for the Brazil squad heading to the 1958 World Cup in Sweden – although a team psychologist called the 17-year-old “obviously infantile” and advised against playing him.

Pele went on to score a hat-trick within one half of the semi-final against France, and another two goals in the final against the host Swedish team – helping Brazil to its first-ever championship.

Injuries kept him out of all but two games in the 1962 Cup, which Brazil won. At the 1970 tournament in Mexico, a now fully mature 29-year-old Pele won the title for a third time with a Brazil side that included other stars such as Carlos Alberto Torres and Tostão, and is considered by many to be the greatest team ever.

“I told myself before the game, ‘He’s made of skin and bones just like everyone else’,” said Tarcisio Burgnich, the Italian defender charged with marking Pele in the 1970 final.

Pele initially retired in 1974 but after finding that ill-advised investments had left him broke he accepted an offer the following year to play in the fledgling North American Soccer League for the then-astonishing sum of about $1 million a year.

Pele’s charisma dazzled even hardened New Yorkers. He hobnobbed with celebrities and once shared a table at the famed Studio 54 nightclub with Mick Jagger, Rod Stewart and Andy Warhol – who called Pele the exception to his saying that everyone would have 15 minutes of fame.

“Pele was one of the few who contradicted my theory: Instead of 15 minutes of fame, he will have 15 centuries,” the artist said.

Even in such company, Pele stayed away from alcohol and drugs, saying he needed to protect his body and serve as a role model for kids.

He admitted to other “weaknesses,” though. His two divorces, numerous affairs, and the two children he acknowledged fathering outside of marriage fueled perceptions of a gap between the squeaky-clean corporate pitchman and the elusive real-life person who preferred to be called Edson.

On the field, Pele led the New York Cosmos to the league championship in 1977 and attracted millions of fans to a sport that had previously seemed inaccessible and European.

Years later, when the United States won the right to host the 1994 World Cup, the head of the U.S. soccer federation called Pele the “most important” reason why.

Pele’s 1,281 goals in 1,366 games, as tabulated by FIFA’s website, came at a startling rate of 0.94 per match. Some of those were friendlies or came in games played as part of his military service, but he was just as prolific in official tournaments, with 757 goals in 812 games.

Pele had suffered from a series of health issues in recent years, including hip surgery that left him with recurring pain and trouble walking unaided. He reduced his public appearances, but remained active on social media.

Pele is survived by six known children. A seventh, whom he didn’t recognize as his own for years, died of cancer in 2006.