Zimbabwe rugby sevens team star Godfrey Magaramombe has been recognised for his impressive season for both club and country after being named the Player of the Year during the Harare Metropolitan Rugby awards gala at the weekend.

Harare Province Rugby hosted its annual awards ceremony at Old Georgians Sports Club on Saturday night, with Magaramombe emerging as the biggest winner after being named the Player of the Year and the Forward Player of the Year after shining for both club and country.

The 24-year-old rising star played a pivotal role in the Cheetahs’ qualification for the Rugby World Cup Sevens before putting on some notable individual performances during the global competition which was held in Cape Town two months ago.

He was an integral member of the Harare Sports Club side which was recognised as the Team of the Year during the same awards.

“It’s such an honour to get the award. Thanks to all the organisers of every tournament I managed to participate in, wouldn’t be possible without them. I would also like to thank all my coaches for the work they put in me, it never goes unrecognised. Much appreciation to all my teammates rugby is team sports where others make you look good. Last but not least my love to my family and friends for always being in my corner through grief and celebrations,” Magaramombe said in an interview with ZimSportLive.

Harare Sports Club, who are nicknamed Sportivo won the Zambia Independence Rugby 7s Challenge, the National Sevens Championship while they were the co-winners of the Paramount Invitational tournament.

Their dominance was finally ended at the weekend when they lost to Pitbulls in the final of the Engen Sevens but their overall success during the season saw them claiming the Team of the Year awards ahead of Old Georgians and Pitbulls.

There was also recognition for another Harare Sports Club player, Tadius Dzandiwandira, who was named the Backline Player of the Year while Pitbulls and Zimbabwe Under-20 speedster Tavonga Ablant was awarded the Rookie of the Year award.

Zimbiru coach Takudzwa Ngirazi was named the Coach of the Year while the Referee of the Year Award was won by Precious Pazani.

Harare Province Rugby chairman Joe Kawonza had plenty to reflect on with pride after another successful season.

“It’s been a very long and interesting year, a lot of rugby has been played, clubs have come up and we are looking forward to a good 2023 season. We’ve got more exciting rugby coming through; a lot of travel involved, I won’t divulge more information at this stage but I can safely say it’s going to be a very good year.

Kawonza, whose administration has managed to attract corporate support for local rugby, also thanked some of their sponsors such as Paramount Garments for their support during the season. 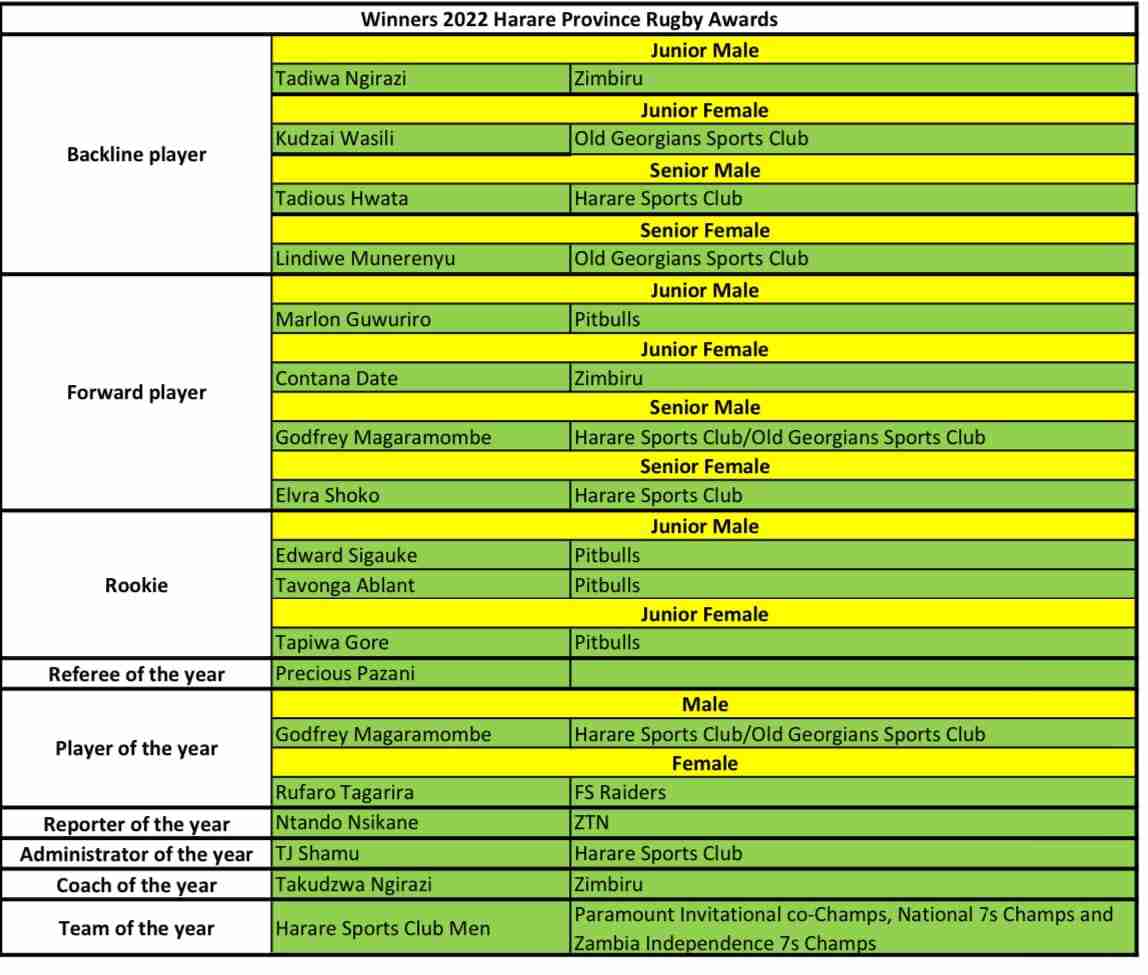