Springbok Women head coach, Stanley Raubenheimer, named an experienced match day squad for their Rugby Africa Women’s Cup opener in Cape Town on Wednesday, when they return to international action for the first time in 2022, with Nolusindiso Booi resuming the captaincy in this first Test match against Zimbabwe.

It’s the first of two Tests the Bok Women will play in the series, with the second scheduled against Namibia on 23 June.

The Test will be the first for the Springbok Women since the match against Wales in Cardiff last November, and Raubenheimer has called on 13 players from that tour to start the season’s opener at City Park in Athlone.

Border Ladies centre, Aphiwe Ngwevu, and Cell C Sharks lock, Nompumelelo Mathe, missed the November tour, but find themselves back in green and gold after they last played against Kenya in August 2021.

Nadine Roos will start at fullback after two November Test appearances on the wing, while Libbie Janse van Rensburg will start at flyhalf, after coming off the bench against Wales, and Ayanda Malinga will earn a first Test start since 2019.

Raubenheimer named three debutants on the bench for the clash, with the DHL Western Province trio of Luchell Hanekom (hooker), Azisa Mkiva (prop) and Nokubonga Siko (flank) rewarded for their fine performances in the Women’s Premier Division in 2021 and 2022. All three were part of the Springbok Women’s alignment camps in recent months, so they will slot right in.

There are also recalls to the pack for locks Nomsa Mokwai and Karthy Dludla. Mokwai (DHL WP) last played for the team in 2019 as a Leopards player and a Northwest University student, while Dludla’s last appearance was against Scotland in that same year.

Raubenheimer said every match from here on in will be important and experiments are not on the agenda as they prepare for the Rugby World Cup later this year in New Zealand.

“Some of our players picked up niggles in Saturday’s Women’s Premier Division final and we decided to give them a rest, which forced our hand in selections a bit,” said Raubenheimer.

“We are slowly but surely trying to put combinations together as we have six Test matches remaining before the World Cup starts. For Aphiwe and Nompumelelo, this is an opportunity to again play international rugby and show to us that they want to be here. We are hoping to build strong competition in the squad.”

Raubenheimer said there will be no pressure on the uncapped players named on the bench: “We want to see how they do at a higher level than they are used to, but there will be no pressure on them to do anything spectacular. They have been with us for a while now and if they do get a chance to play, we hope to see them execute what they have shown on the training field.”

Rugby Africa named Saudah Adiru from Uganda as the referee for the 15h00 kick-off at City Park in Cape Town. South Africa’s Ashleigh Murray-Pretorius will handle the test match between Zimbabwe and Namibia on 19 June at the same venue (kick-off 13h30), and Japan’s Eri Kamimura has been appointed for the final match of the tournament, when South Africa take on Namibia on 23 June at 15h00. 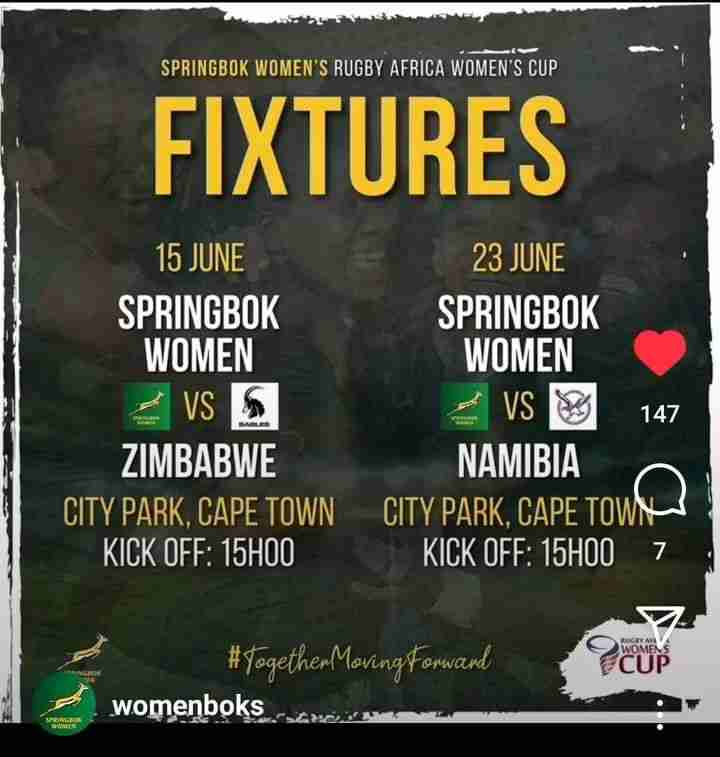