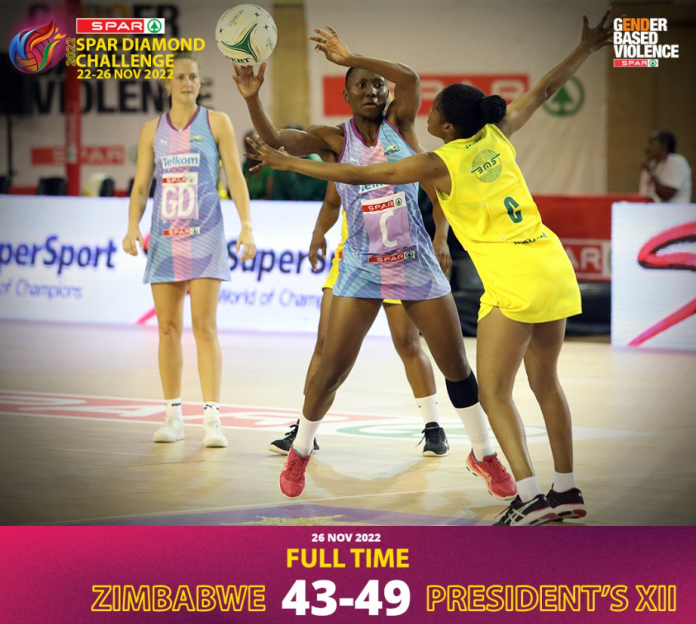 Zimbabwe finished their SPAR Diamond Challenge netball campaign without a victory after they lost 49-43 to South Africa President’s XII in a third-place playoff match in the Rembrandt Hall at the Tuks Sports Centre in Pretoria on Saturday.

The Gems, as the country’s netball team is affectionately known, had a difficult campaign at the Diamond Challenge, finishing without a single win in an event that included South Africa, Scotland and another South Africa side President’s XII.

Zimbabwe capped off a disappointing campaign after losing 43-49 against the President’s XI on Saturday with Nicole Muzanenhamo being named Player of the Match despite the loss.

The loss came a day after they had been held to a 41-41 draw by Scotland, which meant they missed out on a place in the final.

However, the general sentiment is that the Gems could have done better as their campaign was somewhat overshadowed by off-field problems after the hotel where the team was staying in Pretoria briefly confiscated the team’s passports over non-payment of bills.

One of the team’s sponsors, who had committed to footing the team’s bill in South Africa, withdrew their sponsorship after a misunderstanding with the Zimbabwe Netball Association (Zina).

While the matter was finally resolved the Gems had to endure the indignity of having their travelling documents confiscated, a development which certainly affected their next match which they drew against Scotland to miss out on a place in the final.

The Gems were using the SPAR Diamond Challenge to prepare for their second appearance at the Netball World Cup in South Africa next year.

Zimbabwe qualified for the global showpiece for the second time after they finished third, behind Malawi and South Africa during the World Cup Africa qualifiers in Pretoria early this year.

Meanwhile, the Gems will know their World Cup opponents next Tuesday when the draw for the 2023 Netball World Cup takes place in East London, in South Africa’s Eastern Cape

World Netball on Monday revealed the latest World Netball rankings confirming the seeding for the 16 teams for the Netball World Cup.