Dynamos missed a great chance to stretch their lead at the top of the Castle Lager Premier Soccer League to four points after being held to a 1-1 by bottom side Bulawayo City at the National Sports Stadium on Sunday.

After Chicken Inn’s failure to beat Herentals at home on Saturday, Dynamos could’ve increased their advantage at the top but blew the chance after missing several scoring opportunities.

After dominating the opening half and failing to convert the chances that they created, Dynamos were made to wait until the 57th minute to break the deadlock through a close-range finish by midfielder King Nadolo from a rebound after the Bulawayo City had failed to deal with his first attempt.

DeMbare had the opportunity to seal the victory when they were awarded a penalty in the 81st minute when Bulawayo City defender Lewis Ncube handled a goal-bound header by Albert Eonde.

Eonde took the responsibility from the penalty spot but his poorly taken effort was well saved by the Bulawayo City goal minder Reward Muza.

The hosts were made to pay dearly for the missed opportunity when Vincent Moyo pounced on a loose ball inside the box to score on the stroke of full-time after the Dynamos defenders failed to deal with a corner kick.

Bulawayo City’s late equaliser meant Dynamos, who now have 30 points from 14 matches maintained their two-point lead at the top of the log while Amakhosi remained rock bottom on seven points despite finally ending their five-game losing streak.

Meanwhile, in the other high-profile encounter scheduled for this Sunday, Highlanders came back from two goals down to force a 2-2 draw against Bulawayo Chiefs at Barbourfields Stadium.

Chiefs led for the majority of the match, through defender Elvis Moyo, who broke the deadlock at the half-hour mark before Diego Masiyiwa doubled the lead in the 42nd minute.

However, Bosso never gave up and pulled one back through a well-taken freekick by Adrian Silla in the 75th minute.

Silla completed his brace with another freekick at the death to salvage a point for Highlanders.

Despite rescuing a point, Bosso would have still been disappointed after watching their team fail to win in their last five successive league matches, a run which had resulted in them dropping to 11th on the log on 16 points from 13 matches. 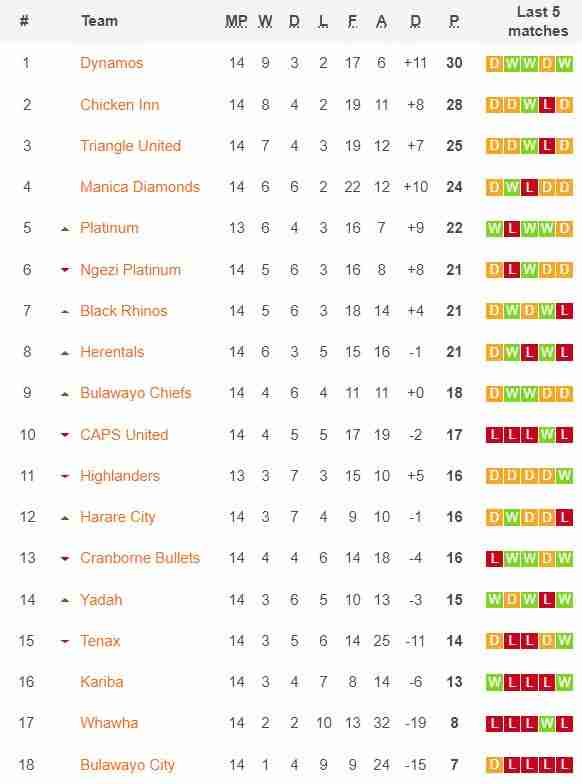