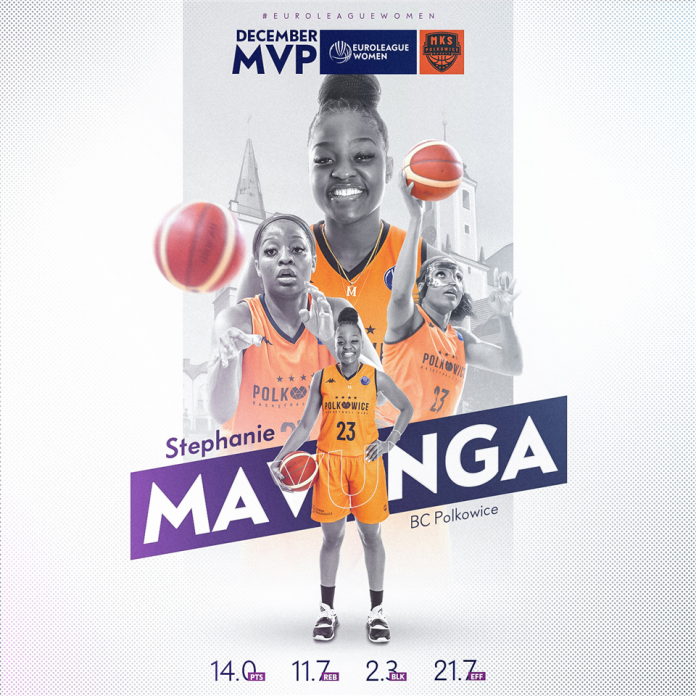 Munich – Zimbabwe-born American basketball star Stephanie Mavunga has been crowned EuroLeague Women MVP for the month of December after adding a serious punch to the amazing season of underdogs BC Polkowice.

The forward takes the accolade after producing some excellent performances during the period, all of which carried her team to a perfect three wins from their three outings.

First up in the month, Mavunga propelled Polkowice to an absorbing 76-73 win at home to Valencia Basket Club, finishing the contest with a powerful double-double of 18 points and 13 rebounds.

There was also a second nerve-shredding 63-62 success at Tango Bourges Basket when she posted a powerful and pivotal defensive effort. That returned 9 points, 12 rebounds, 4 steals and a block.

Polkowice then signed off 2022 in style as they moved to 6-1 at the top of Group A, with a one-sided 89-56 triumph at home to Atomeromu KSC Szekszard. Mavunga excelled with 15 points, 10 rebounds and 4 blocked shots to match a personal season’s best.

Those three December displays combined for a performance efficiency valuation of 21.7; founded on 14.0 points, 11.7 boards, and 2.3 blocks per game.