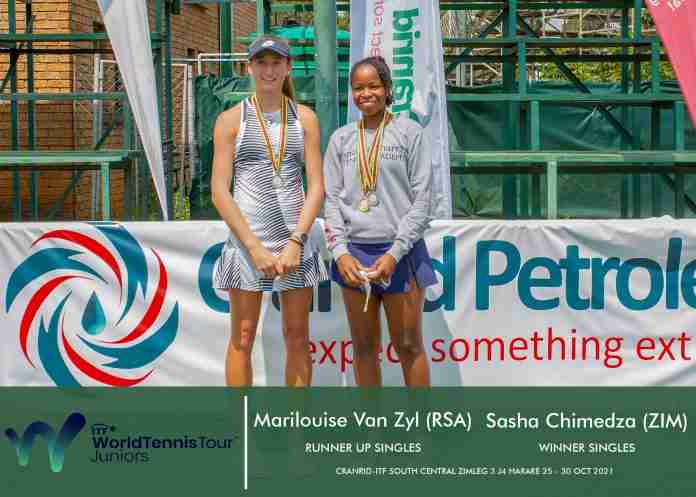 The 14 –year-old Chimedza and her partner, who represents Saint Kitts and Nevis beat the South African pair of Heike Janse Van Vuuren and Leigh Van Zyl 6-3, 6-2 in the final.

This was Chimedza’s second title from the three tournaments which have been running at Harare Sports Club, in the last three weeks, having won the singles title, in the first event.

She also reached the doubles finals that same week when she teamed up with Tadiwanashe Mauchi.

In total Chimedza, who trains at the Anthony Harris Tennis Academy in Cape Town, South Africa now has one singles title and three doubles titles on ITF World Junior Tour.

The duo of Chimedza and Mauchi will headline an eight-member Zimbabwe team which will take part at the upcoming Africa Junior Championships due to take place this month in Tunisia.

The event is scheduled for November 21 to 29 and is catering for the 18-and-Under players.The team is made up of four boys Ethan Sibanda, Lyle Zaloumis, Benedict Badza and Takura Mhwandagara and four girls Rufaro Magarira, Chimedza, Mauchi and Tanyaradzwa Midzi.