The 26-year-old boxer will be hoping to utilise home advantage when she takes on the experienced Monoz in the high-profile bout set for the Harare International Conference Centre.

The historic bout is the first WBC-sanctioned fight to be held in Zimbabwe.

The winner of Friday’s high-stakes fight will be able to challenge for the WBC super bantamweight gold, which is in the hands of Yamileth Mercado, also of Mexico.

There will also be a lucrative US$20 000 prize money for the winner but in an effort to boost Chiwandire’s morale ahead of the fight, Zororo-Phumulani, the leading funeral and repatriations service provider based in South Africa, has added another cash incentive for the Zimbabwean.

“Zororo-Phumulani would want to take this opportunity to wish Kudakwashe Chiwandire all the best in her title fight and the company has pledged $1 000 if she retains her title. If she fails to do so the company has also pledged $500,” Zororo Phumulani managing director Oliver Mufudze said ahead of the fight.

“Zororo-Phumulani continues to support every Zimbabwean success story and is rallying behind Chiwandire as she defends her title against Mexico’s Zulina Munoz. The relationship between the company and Chiwandire was first initiated when Zororo Phumulani came to the rescue of the boxer by providing her with air tickets to Zambia where she defeated Catherine Phiri to become the WBC Interim Bantamweight Champion earlier this year. In August, the champion was in South Africa for a training camp and Zororo Phumulani also came on board by giving her a red-carpet welcome,” he added. 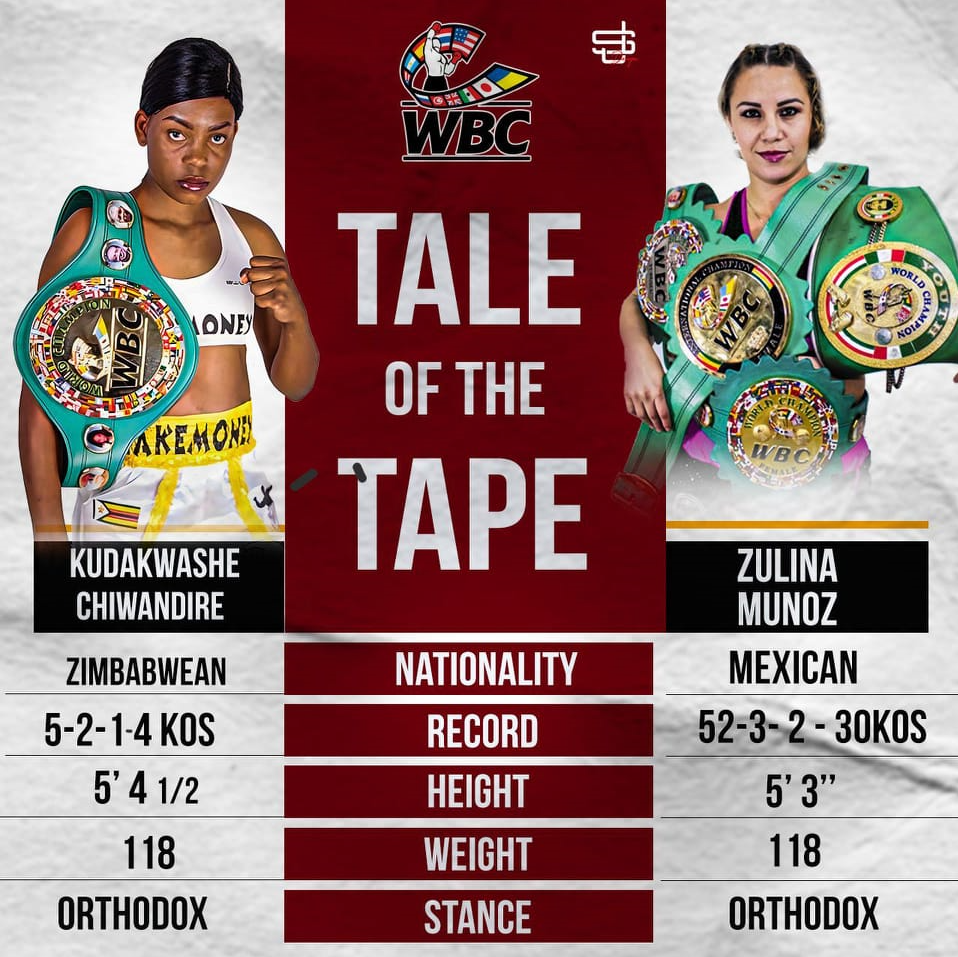 Chivandire clinched the WBC bantamweight title back in February after defeating Zambia’s Catherine Phiri in her own backyard.

She was in danger of being stripped of her title after her fight against Munoz was postponed several times due to lack of funding before the Zimbabwe government through the Ministry of Sport, Arts and Recreation agreed to bankroll the fight.

Thirty-six-year-old Munoz is the more experienced of the two, with 58 professional fights, and an impressive 52 wins, of which 30 were knockouts while she also had four losses and two draws.

Chiwandire, on the other hand, has eight fights, winning five, losing and managing one draw.