Dynamos survived a late onslaught from hosts Ngezi Platinum Stars to snatch a point at Baobab which saw them climb to the top of the Premier Soccer League log standings while Chicken Inn lost 3-0 against bottom side Whawha at Ascot Stadium.

After winning their last five successive matches, Dynamos were looking for their first at Ngezi since the platinum miners were promoted to the topflight league in 2016.

Despite yet again failing to beat their opponents in their home ground, the point they gained was enough to lift them to the top of the Premiership standings.

“It feels good to be at the top but there is still a long way to go. Of course, it gives you confidence but at the same time it demands you to put even more effort because it puts more pressure on the team,” Dynamos coach Tonderai Ndiraya, a former head coach at Ngezi, told journalists after the match.

“And we just had to push harder than what we are doing at the moment because for you to stay at the top you have to be at your best in each and every game.

“I thought Ngezi Platinum Stars were strong today just like we anticipated. We knew that they would be very strong especially when they play here at home. I thought we managed the game quite well. I thought we defended very well especially in the second half,” Ndiraya added.

DeMbare are now on 23 points from 11 matches, the same points tally as Chicken Inn, who were stunned by a resurgent Whawha.

The Gweru-based side put in arguably their best performance of the season when they outmanoeuvred title hopefuls Chicken Inn 3-0 at Ascot stadium to move from the bottom of the standings.

Goals from Tineyi  Chitora, Raymond Horonga and Jayden Barake propelled the prison wardens to just their second win of the season, which lifted them to 17th position on eight points from 11 matches.

Champions FC Platinum scored two important second half goals to brush aside the challenge of Bulawayo City at Barbourfields.

FC Platinum, who have been struggling to score goals in recent weeks benefitted from some costly errors from City goalkeeper Bhekimpilo Ncube, with Panashe Mutimbanyoka and Thandolwenkosi Ngwenya finding the back of the net on both occasions.

The win lifted FC Platinum to fifth position on the log on 18 points while Bulawayo City slipped below Whawha to the bottom of the log on a paltry six points.

Black Rhinos bounced back from last week’s defeat at Dynamos by securing a crucial 2-1 victory against ZPC Kariba at Sakubva while Herentals edged Triangle 1-0 at the National Sports Stadium. 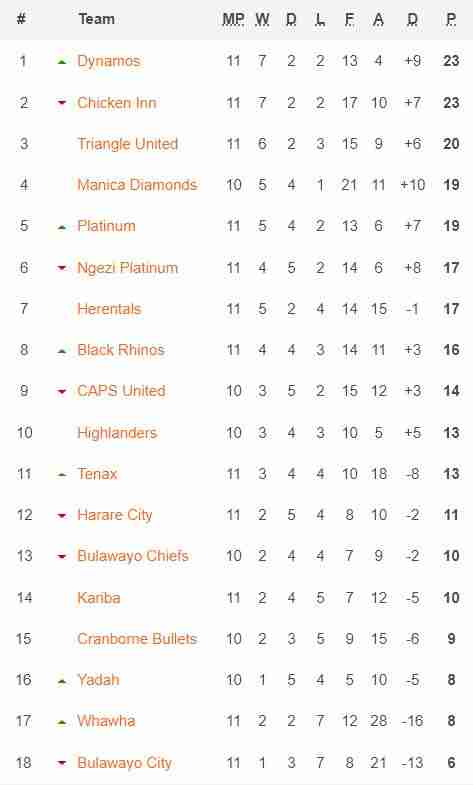