Chicken Inn stretched their lead at the top of the log standings to four points after beating Cranborne Bullets 4-1 at Sakubva while Harare giants Dynamos succumbed to a shock 1-0 loss against Yadah at the National Sports Stadium on Saturday.

Cranborne took a surprise lead in the 19th minute through a well-taken freekick by winger Jarrison Selemani but the advantage was short-lived as Bret Amidu restored parity eight minutes later.

Chicken In seized control of the match six minutes before halftime when Malvin Hwata found the back of the net with a cool finish before striker Brian Muza stretched the lead in the 68th minute to go to the top of the goal-scoring charts on 10 goals.

Young Warriors star Munashe Pini completed the rout against the relegation strugglers by scoring the fourth goal in the 72nd minute.

With the victory, Chicken Inn opened a four-point gap at the top although second-placed FC Platinum have a chance to close the gap back to a point when they face off with Tenax at Sakubva on Sunday.

Meanwhile at the National Sports Stadium, veteran forward Ralph Matema rolled back the years after rising from the bench to net the solitary strike with his first touch of the ball as Yadah FC claimed their first-ever league win over Dynamos.

The 40-year-old striker, who has haunted Dynamos in the past during his time at Highlanders came on for Vincent Sango in the 82nd minute and needed barely 30 seconds to settle the contest with a well-taken goal.

The goal sealed Yadah’s first win over Dynamos since they were promoted into the topflight league back in 2017.

After being stunned by minnows Whwawha in their last match before the midseason break, Ngezi were desperate to return to get their campaign back on track against struggling Bulawayo City.

After being frustrated by the hosts’ defence in the first half, the Benjani Mwaruwari-coached side finally broke the deadlock four minutes into the second half through a glancing header by Bruno Mtigo.

Midfielder Denver Mukamba doubled the lead with a brilliant freekick in the 56th minute before striker Delic Murimba sealed the win with a clinical finish in the 85th minute. 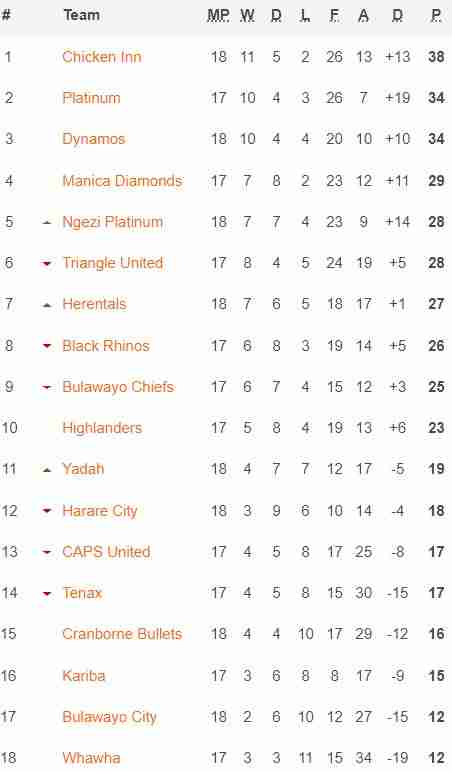