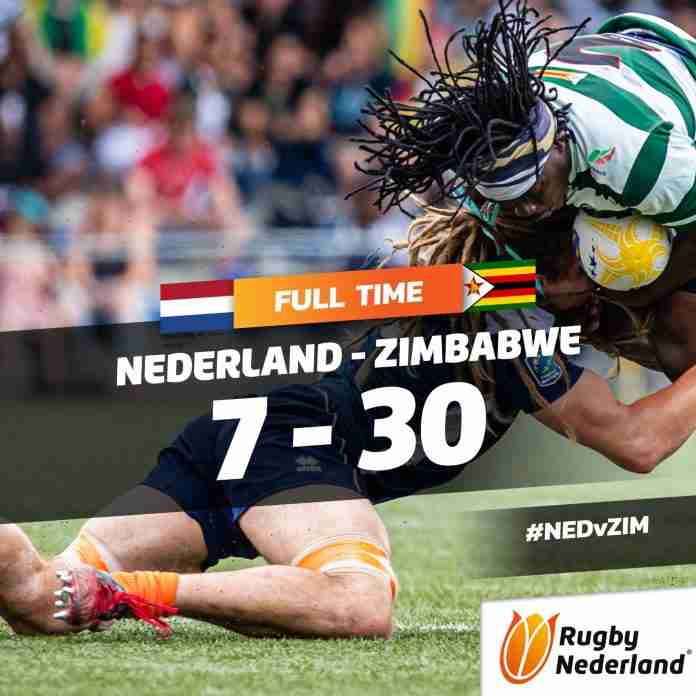 The Sables gave themselves a timely boost ahead of next week’s Rugby Africa Cup after wrapping up their preparations with a dominant 30-7 (18-7 at halftime) win over the Netherlands at the Rugby Stadium Amsterdam on Saturday.

Playing in their first match on European soil since 2014, the Zimbabwe senior rugby side make light work of a higher-ranked Dutch team.

The Sables scored two tries in each half through centres Takudzwa Chieza and Matthew McNab,  debutant fullback Takudzwa Musingwini and replacement hooker Liam Larkan, who was also making his first appearance for Zimbabwe.

Skipper Hilton Mudariki and Musingwini, who were alternating the kicking duties chipped in with 10 points from two penalties and as many conversions.

After dominating set-pieces and other areas, Sables head coach Brendan Dawson’s only concern ahead of next week’s Rugby Africa Cup will be his team’s goal kicking after missing 4 penalties and 2 conversions.

The Sables put their opponents on the back foot from the onset, and broke the deadlock in the third minute through a try by inside centre Takudzwa Chieza before Mudariki added the extras.

With Netherlands struggling to keep up with the pace of the game, the Sables stretched the lead through a close-range penalty by Musingwini.

McNabb finished off a brilliant team try in the corner following a dominant Sables scrum but against the run of play Netherlands remained within touching distance through a 60-meter breakaway by flank Liam Stone goes after the Zimbabwe players stopped waiting for a knock call that never came.

Fly-half Mees Van Oord slotted home the extras before Zimbabwe responded with a penalty by Musingwini to take a 18-7 halftime lead.

Just as they did in the opening half Zimbabwe continued to bully their opponents in the second half, especially at scrum time.

The Dutch side struggled off their own feed, conceding a lot of penalties, as the Sables, who were cheered on by a very vocal group of fans maintained a firm stranglehold on the match.

Fullback Musingwini showed tenacity to score a try on his debut before replacement hooker Liam Larkan finished off a Sables rolling maul as Zimbabwe sealed a dominant win.

Zimbabwe, who went into the match ranked 34th on the World Rugby Rankings, eight placed below their opponents who were ranked number 26 in the world.

After yesterday’s result, the Sables are set to jump six places to 27th when the World Rugby Rankings are updated on Monday while the Netherlands will drop to 28th.

The Sables will now return to France to prepare for their Rugby Africa Cup quarterfinal against Ivory Coast on July 2.

This year’s Rugby Africa Cup, which will be held in France from July 1 to 10, 2022 also serves as the final round of the Rugby World Cup 2023 qualifying for African countries.