Zifa has hit back at the Sports and Recreation Commission (SRC)’s decision to suspend its entire board after allegedly causing the abandonment of all Castle Lager Premier Soccer League matches scheduled on Tuesday.

The PSL was forced to postpone its matches after, ZIFA, through its referees’ committee withheld matches officials who were scheduled to take charge of the four matches that had been lined up.

Local referees are provided to the PSL by Zifa and some match officials who spoke on condition of anonymity said they had been advised by their superiors not to attend the matches.

In a statement on Tuesday evening, the PSL said it has decided to postpone all scheduled match-day two matches.

“This serves to advise that all the Castle Lager Premier Soccer League Match-day Two fixtures scheduled for this week have been postponed. This has been necessitated by the non-appearance of match officials at all the match venues today,” PSL said.

“However, some of the match officials had travelled from various parts of the country and had logged in for team inspections only to withdraw their services before the commencement of team warm-ups. The PSL is concerned about the lack of communication from the ZIFA Referees Committee as we tried to engage them on the matter to no avail. We however hope that a solution will be reached soon. We will update on any further developments,” the league’s governing body added. 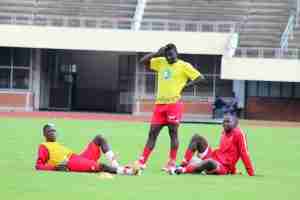 The no show by local referees at PSL matches came a few hours after the ZIFA board was dissolved by the SRC in the morning for several reasons which include gross incompetence and failure to account for funds
Players, technical officials and fans were left stranded with no match officials in sight and after going through the warm-up routines players ended up milling around hoping for the arrival of referees.
Ngezi Platinum Stars were scheduled to host Highlanders at Baobab with Triangle taking on Dynamos at Gibbo Stadium is the pick of the midweek matches.

Herentals’ scheduled clash with Black Rhinos at the National Sports Stadium and the encounter between Yadah and ZPC Kariba also failed to kick off.