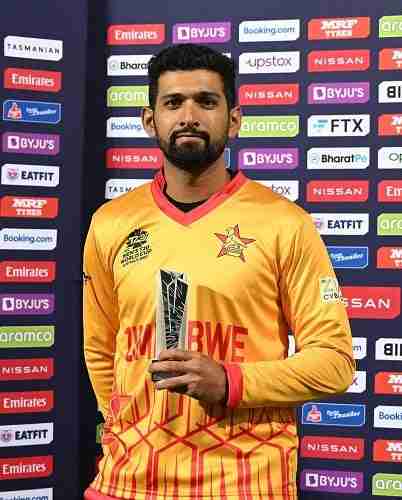 Zimbabwe cricket team star all-rounder Sikandar Raza has been named in the Most Valuable Team of the ICC Men’s T20 World Cup 2022 following his exploits at the recently concluded global tournament held in Australia.

Raza is the only Zimbabwean player included in the all-star team which was announced after Sunday’s final in Melbourne.

The @upstox Most Valuable Team of the Tournament revealed 👀

What do you make of it?

The side was put together by a selection panel including commentators, former international players and journalists.

The Zimbabwe cricket star was the driving force behind the Southern African nation’s brilliant run to the Super 12 stage as he starred with both bat and ball.

Raza set the tournament alight in Zimbabwe’s opening game as he scored a quickfire 82 off 48 balls against Ireland in Hobart.

He also excelled in the Chevrons’ matches against Scotland, the Netherlands and India.

However the major highlight of his campaign came when he claimed three for 25 as Zimbabwe stunned his country of birth Pakistan in Perth.

Pakistan went on to reach the final of the tournament where they lost to England on Sunday.

In total Raza finished the competition with 219 runs and 10 wickets.

He is joined in the team of the tournament by the England trio of captain, wicketkeeper and opening batter Jos Buttler and his fellow opener Alex Hales as well as seamer Sam Curran after they helped steer their side to a second ICC Men’s T20 World Cup title.