The historic bout, which was officially announced on Wednesday, will be staged at the Harare International Conference Centre on August 20.

Chiwandire made history when she became the first Zimbabwean female pugilist to win the coveted WBC belt after defeating Catherine Phiri of Zambia in Lusaka earlier in February.

She is now set to defend her title against Munoz before angling for the WBC Super Bantamweight gold belt, which is in the hands of Yamileth Mercado, also of Mexico.

The boxer has already intensified her training ahead of the bout and revealed that she will be aiming for a knockout victory against her Mexican opponent.

“There is nothing difficult about fighting Munoz, it’s the same as with Catherine Phiri. The training I was doing preparing for Phiri’s match, I will do twice as much so that I can defeat her (Munoz) with a knockout,” said Chiwandire during the press briefing at the Ministry of Youth, Sport, Arts and Recreation offices.

“I’m particularly excited about this fight because I’m defending the title in Zimbabwe, something that has always been my dream as a boxer. As a mother, woman and a young lady, I hope hosting of this event will continue to inspire more women in Zimbabwe to participate in any sporting discipline of their choice. I’m confident we are yet again set to make history for our beautiful country.”

The 34-year-old Munoz is the more experienced of the two, with 58 professional fights, and an impressive 52 wins, of which 30 were knockouts while she also had four losses and two draws.

Chiwandire, on the other hand, has eight fights, winning five, losing and managing one draw. 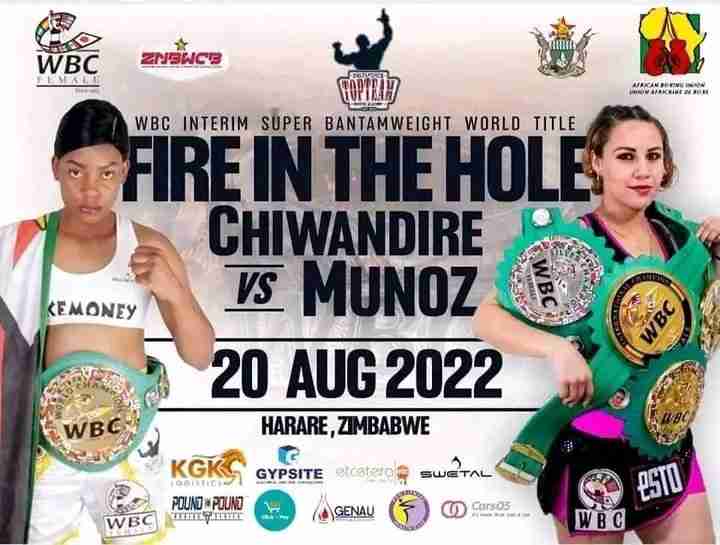