The 38-year-old winner on the Sunshine Tour was in brilliant form carding a four-under-par-68 at his home course, Royal Harare Golf Club which was yet again in the pristine condition expected from a world-class golf course.

Cairns who is part of the Zimbabwe Professional Golfers Association (ZPGA) executive said he is very excited by the return of the ZPGA Championship following a lucrative US$10 000 sponsorship from Universal Sports Club and its members.

“It great to have the ZPGA Championship back on the schedule, I’ve been on the ZPGA committee with a few driven people over the last few months and we have really set our minds into growing the tournament schedule locally and proving more opportunities for our players. I think corporate Zimbabwe is starting to have a better appreciation of what we are trying to do,” Cairns said.

“I think we are trending in the right direction we are working with great sponsors and partners who see the vision. Universal Sports Club have come to the party by bringing back the PGA Championship and we are really grateful to them. It only takes a few corporates with the vision to see the opportunity for their brand and to grow the game of golf and get more Zimbabwean flags flying high on the world circuits,” he added.

Cairns will begin the second round of the 54-hole tournament, two shots clear of the trio of young Kulaisi, duo of Milazi and Saurombe, who appears to be reaping the benefits of his extended run in South Africa’s developmental circuit, the Big Easy Tour recently.

Chapman Golf Club teaching pro, William Lake is in a three-way tie for fifth position with Tatenda Mkunde and junior golfer Tariro November, who held his own in the star-studded field against the pros.

It was also a good day in the office for former Sunshine Tour winner Tongo Charamba as he overcame a back niggle to card a level par round of 72.

Charamba is tied for seventh position together with Mohammed Mandhu and Bulawayo-based Brian Gondo.

A total of 54 players drawn from the country’s leading professionals, amateurs and junior golfers are taking part in the ZPGA’s flagship tournament which is making a return on the local golf calendar after a lengthy absence due to lack of sponsorship. 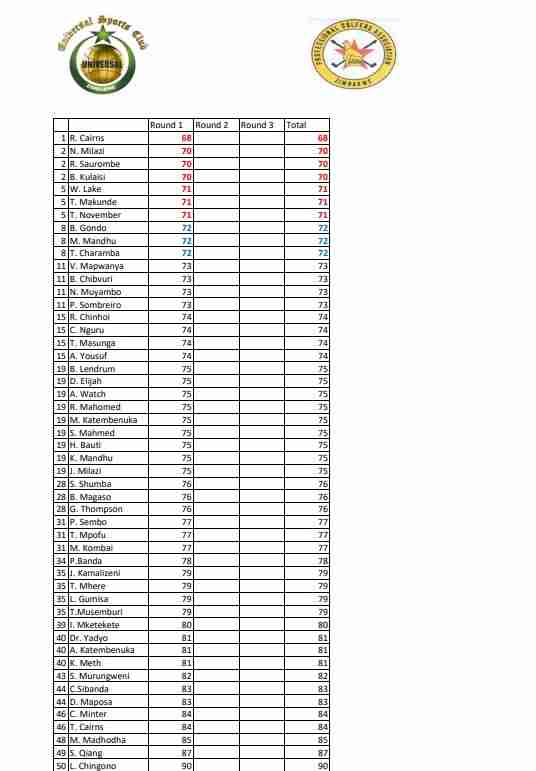