Caps United closed the gap at the top of the Castle Lager Premier Soccer League top six points after Phineas Bhamusi’s first-half goal proved enough to secure a hard-fought 1-0 victory over Yadah at the National Sports Stadium on Sunday.

After a spell of constant pressure, Caps broke the deadlock in the 38th minute when Joseph Thulani’s flick from Valentine Musarurwa’s corner found Bhamusi, who calmly controlled the ball with his chest and slotted the ball past Yadah goalkeeper Panashe Nyabunga.

Caps United finished the match with 10 men after defender Marshall Machazane received his second yellow card from the referee Munyaradzi Majoni in the 72nd minute after a stamp on the Yadah skipper Raph Matema.

Despite finishing the match with 10 men, Caps United held on for an important win which lifted them to seventh position on the log.

The victory was a welcome relief for Cap United, who were desperate to return to winning ways after last week’s embarrassing 2-1 defeat away at minnows Tenax.

Caps United move into seventh on 17 points, just six points behind joint leaders Dynamos and Chicken Inn, who both dropped points this week.

Yadah, who were looking to kick on after picking up their first win of the season last weekend remain in the drop zone in 16th position on eight points.

Meanwhile at Barbourfields Stadium in Bulawayo, there was frustration for Highlanders after they missed an opportunity to edge closer to the leading back after being held to a 2-2 draw by Cranborne Bullets.

Regardless of their failure to collect maximum points, Bosso showed character to come back from a two-goal deficit to salvage a point from the encounter.

Highlanders found themselves on the backfoot early on after conceding two quick goals in a space of two minutes with just 11 minutes on the clock.

The Bulawayo giants however pulled one back in the 34th minute through Adrian Silla to give themselves a lifeline before Lynoth Chikuhwa headed home the equaliser after 77 minutes.

In another match played on Sunday Manica Diamonds were held to their fourth successive draw after firing blanks in a goalless stalemate against Bulawayo Chiefs at Sakubva Stadium. 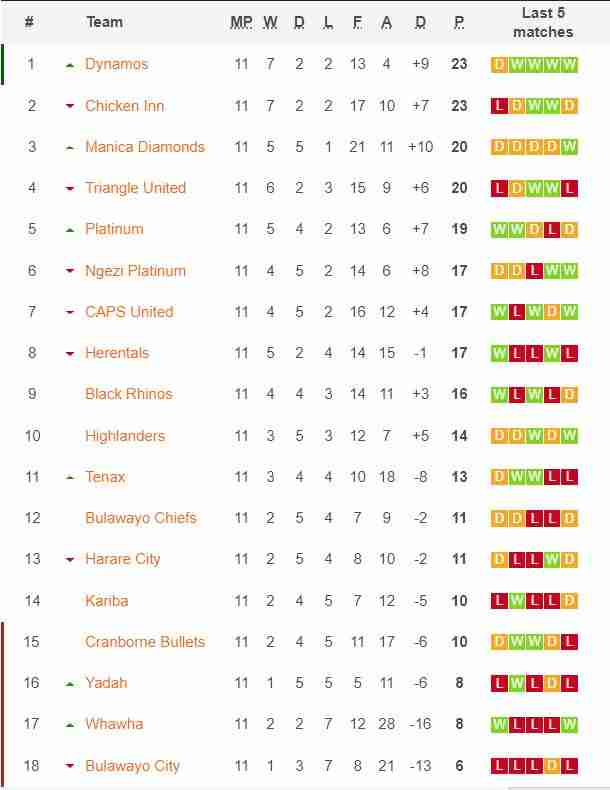