Former Zimbabwe international cricketer Keegan Meth is swapping his cricket bat for a golf club after successfully qualifying for the FBC Zimbabwe Open Golf Championship which tees off on Thursday at Royal Harare Golf Club and Chapman Golf Club.

The 34-year-old Meth, who is now based in Canada, represented Zimbabwe in two Tests, 11 ODIs and three Twenty20 Internationals as a professional cricketer between 2006 and 2013.

While his cricket days are now far behind him having since hung up his cricket bat, Meth is now pursuing his other passion as an amateur golfer.

And he is set to tee off in the biggest golf event of his career after qualifying for the 2022 edition of the FBC Zimbabwe Open, where he will have an opportunity to compete against some of the top players on the Sunshine Tour.

Meth secured his place in the main field of the Sunshine Tour co-sanctioned event after carding a round of nine-over par 81 to finish in a tie for 12th position during the pre-qualifier at Chapman Golf Club on Monday.

A total of 15 slots were available during the pre-qualifier which attracted a big field of 80 hopefuls.

Bulawayo-born Meth rose through the ranks at Matabeleland Tuskers, where he established himself as a frontline seam bowler and middle-order batsman.

A consistent showing at the domestic level backed by the promise of youth saw Meth make his debut for Zimbabwe at the early age of 18.

He had impressive performances at the U-19 stage and the paucity of players in the Zimbabwe set-up saw him make his debut against Kenya in early 2006.

Meth’s career suffered a setback in 2011 after suffering a terrible laceration of his lips when he was struck by a fierce straight drive back at him by Nasir Hossain.

He made his Test debut against Bangladesh in 2013, which was his last outing for Zimbabwe before retiring from international cricket at the age of 25. 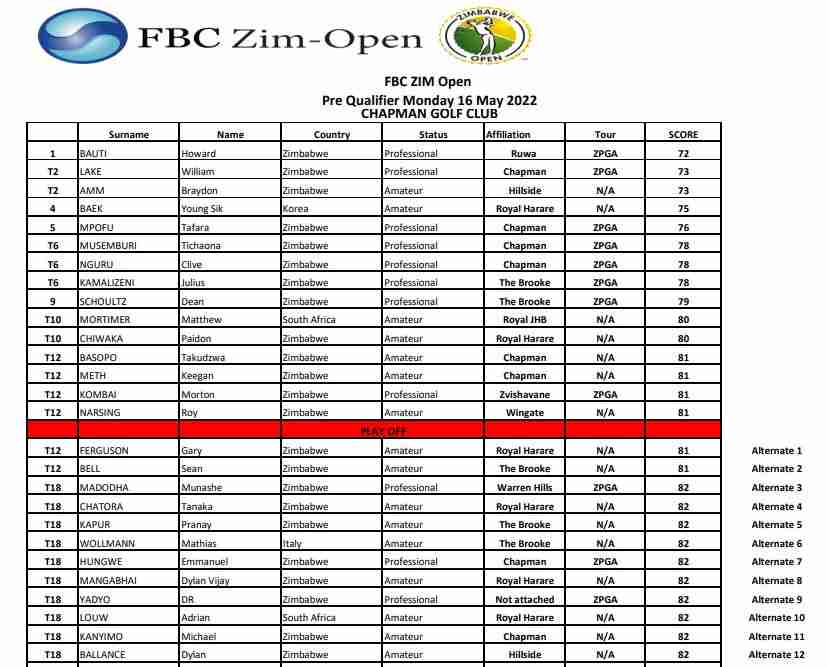