After going through a difficult run of form on tour this season, Zimbabwean golfer Ben Follet-Smith is slowly rediscovering his mojo.

On Thursday he gave himself a big confidence boost after clinching the inaugural edition of the Chevron Golf Tour’s Gokomere Open with a gritty one-shot victory at Chapman Golf Club.

Impressive scores of 69 and 68 in the opening two rounds meant Follet-Smith went into the final day with a three-shot lead ahead of Mohammad Mandhu.

Although Mandhu mounted a late challenge with a 70, Follet-Smith’s solid level par round of 72 was enough for him to secure the win on a good 54-hole total of seven-under-par 209.

The victory was a welcome tonic for Follet-Smith, who has been slowly regaining his confidence after going through a difficult run of form on the Sunshine Tour and the Asian Tour.

“I’ve been struggling with my game for quite a while now and the turning point came when I went to Korea a couple of weeks back. I drove the ball well tee to green which is where I have been struggling, unfortunately, the putter wasn’t working but I leant from that and I just came back and worked on my wedges and putting and keeping the short game tight,” Follet-Smith said.

While recharging his batteries back home, Follet-Smith heard about the Gokomere Open which is the second event on the newly launched Chevron Golf Tour and decided to enter the event.

In the end, it was a good decision for the 28-year-old, who has won several titles locally and once on the Sunshine Tour and the Big Easy Tour, to take part in the tournament after adding to his trophy collection.

“I have just been practising and enjoying being home with friends and family and heard about the Chevron Tour. I thought this is a great initiative for Zimbabwe golf as well as professional golf because of the experience it can give players to play in tournaments like this and give them the understanding of tournament pressure, prep and what you have to do to be at your best,” he said

“Fortunately, I came and played and shot three under on the first day which is 69 on the first day and four under. I played really well on the second day much better than I played during the whole week, unfortunately, I made a couple of mistakes as I had two doubles which cost me four shots but I still shot 68. Today I just got around the golf course, I didn’t play my best golf I managed to shoot level par and win by one and I’m very pleased with my effort. I think the Chevron Tour is doing great things and I would love to play in more of their tournaments.”

Follet-Smith finished a shot ahead of his Royal Harare Golf Club mate Mandhu, who finished on six-under-par 210 following scores of 73, 67 and 70.

With the victory, Follet-Smith earned US$ 1000 while Mhandu claimed US$850.

Robson Chinhoi settled for third position after carding 75, 71 and 70 for a total of one under par while Visitor Mapwanya (75, 71 and 70) was fourth on level par.

Wingate Golf Club’s Tatenda Makunde settled for fifth position on the leaderboard on three-over-par, a shot better than veteran pro Davison Elijah who was in solo sixth.

The top 10 players including ties walked away with prize money from the tournament prize fund fund of US$5,000

A total of 34 professional golfers and seven amateurs took part in the second instalment of the Chevron Golf Tour after the season-opening Rozwi Classic which was on by Zambian golfer Sydney Wemba after edging Zimbabwe’s Ignatius Mketekete in a playoff in Lusaka last month.

Chapman Golf Club-based golfer Rasheed Mohammed was the highest placed amateur golfer in the field after carding scores of 77, 76 and 76 for a total of 13-over-par 229. 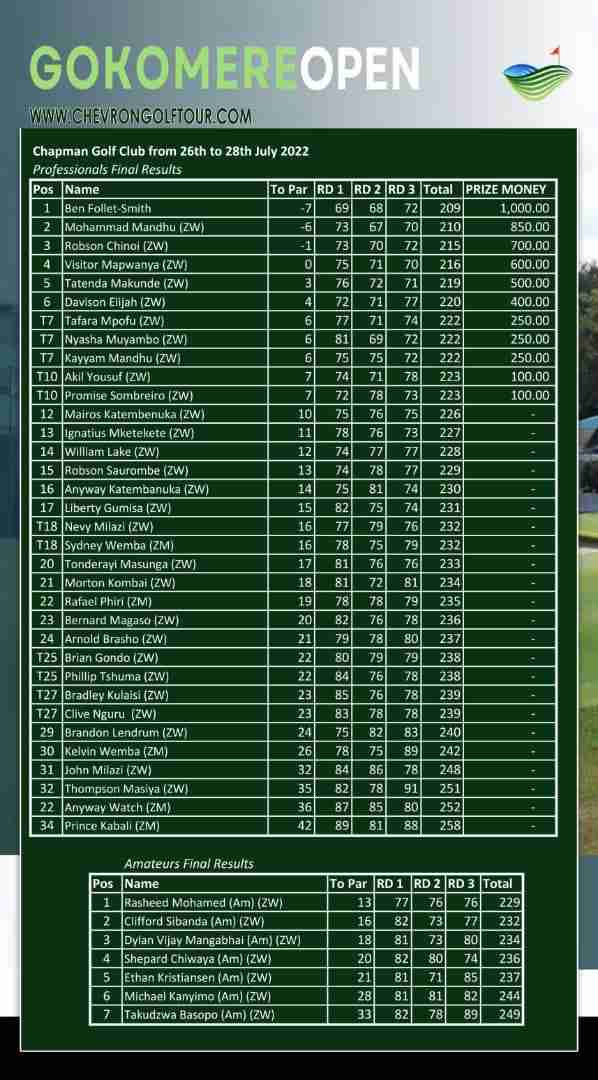