Former Zimbabwe Professional Golfers Aassociation (ZPGA) president Gary Thompson says he is impressed by the tremendous growth of the professional game in the country following the success of the inaugural edition of the LiuGong Pro-Am Invitational at Chapman Golf Club last week.

Sombreiro needed an eagle on the 18th hole for a round of four-under-par-68 to hold the clubhouse lead in the 18-hole tournament.

The inform Chinhoi, who has been in very good form on the African circuit, following back-to-back wins in the Democratic Republic of Congo, also fired a 68 to force a nail-biting playoff.

Sombreiro held his nerve remarkably to win after four extra holes for his maiden victory on the ZPGA circuit.

And Thompson, who was behind the successful organisation of the event, described the inaugural edition of the LiuGong Pro-Am Invitational as a great success, paying tribute to the players for putting on a good show.

“The LiuGong Pro-Am Invitational was a great success led by some of the most exciting up-and-coming and the best of Zimbabwean professional players. Promise’ victory in a four-hole playoff was phenomenal and the sportsmanship showed by Robson Chinhoi was just amazing,” Thompson said.

The former ZPGA president also paid tribute to the sponsors LiuGong for supporting the event.

“LiuGong is one of the biggest brands in its category of heavy earth moving machinery in the construction, mining, and manufacturing industries and we are delighted that they joined us on a very as we put on a phenomenal and world-class show,” he added.

The LiuGong Pro-Am was sponsored LiuGong Zimbabwe, the official dealer for LiuGong specialised heavy construction equipment, spare parts, as well as maintenance and repair services in the country.

The event was also graced by the company’s director Xuegong Zhuo and Jiaqi Li, who is the founding president of the Chinese Business Association in Zimbabwe.

ZPGA also used the event to honour Zimbabwean professional golfers who have raised the country’s flag high such as rising star Scott Vincent, who has been enjoying an impressive season on the Asian Tour, the Japan Golf Tour, and the LIV Golf Invitational Series. 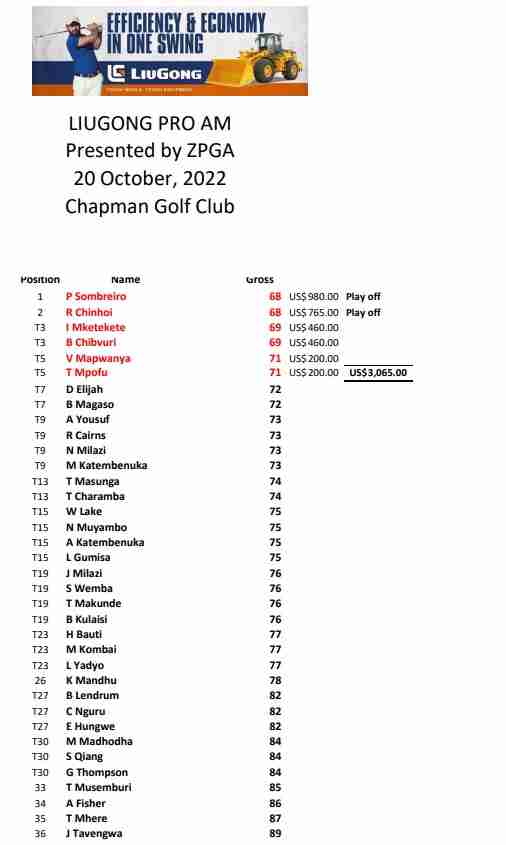