In-form Visitor Mapwanya ran away with the Chevron Tour’s Nalitale Classic title at Chapman Golf Club on Wednesday on Sunday, closing with a five-under 67 for a 12-stroke victory.

The 31-year-old former national amateur team player finished on an impressive 54-hole total of 17-under 199 for his second victory on the Chevron Tour this season after clinching the Mapungubwe Challenge in Zambia four months ago.

Mapwanya, who recently won the Seed Co Malawi Open started the final day six shots ahead of the duo of Robson Chinhoi and Davison Elijah after starting his campaign with identical rounds of 66.

He never looked like surrendering the healthy advantage as he closed with an impressive 67 to finish a massive 12 shots ahead of the duo of Zambian Sydney Wemba and seasoned local pro Tongo Charamba, who finished tied for second position on five-under-par.

The trio of Muhammad Mandhu, Nyasha Muyambo and Elijah were tied for fourth on three-under-par while Chinhoi was a shot back in solo seventh position after closing with a disappointing 76.

A total of 40 professionals and invited amateurs took part in the Nalitale Classic which is the fifth event on the inaugural season of the Chevron Tour, which has positioned itself as a tailor-made gateway for professionals and elite junior and amateur golfers aspiring to join the pro ranks.

The tour boasts a flood of incentives geared to encourage the next wave of professionals from Southern Africa to break onto the big stage. 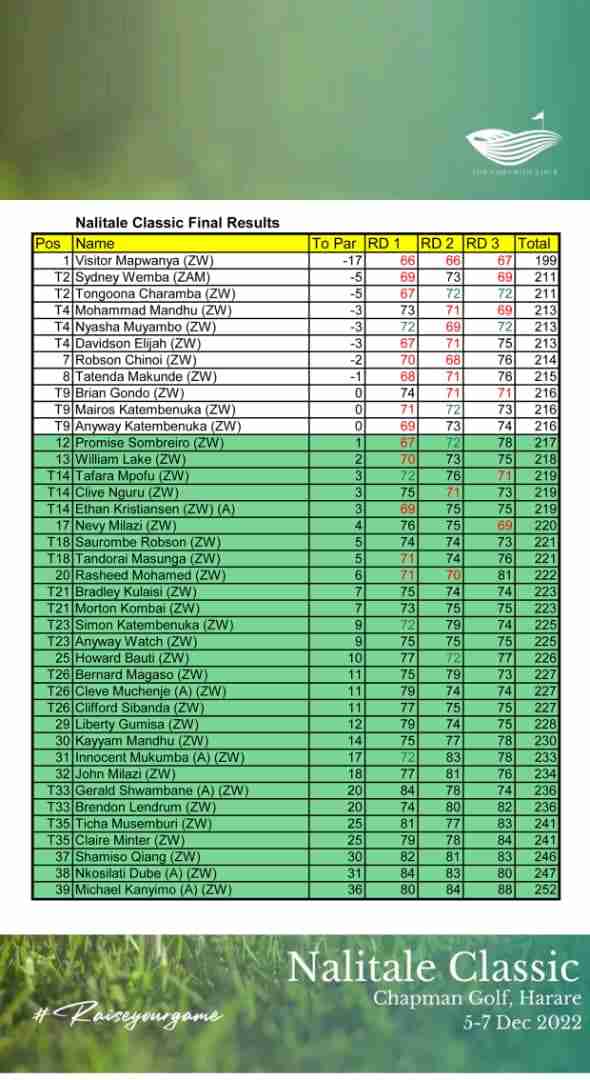