Hartford, Connecticut — When Methembe Ndlovu was growing up in Zimbabwe, he thought he had to make a choice at age 16: either he could play soccer or pursue an education.

In Zimbabwe, he could not do both at a high level. Both of his parents were schoolteachers; they wanted him to continue his education. Ndlovu wanted to play soccer.

One day, at soccer practice, a man from the U.S. showed up. He talked about colleges in America and how Ndlovu could play and go to school.

That moment changed his life.

“I like to say I’m one of the most fortunate guys,” Ndlovu said.

Soccer and education have taken him all over the world – to Dartmouth College in Hanover, New Hampshire, where he saw snow for the first time and was a four-time Ivy League player, to playing soccer professionally, to coaching the second-most popular soccer team in Zimbabwe, to helping start a program that combined education about AIDS and HIV with soccer.

Now Ndlovu, 49, is back in New England, in his first year coaching the men’s soccer team at Trinity College. Former coach Mike Pilger retired after 18 seasons in November after the Bantams went 3-11-1 last season.

“I spent my first few years in the U.S. on the East Coast, so this has always felt a little bit like my home in the U.S,” said Ndlovu, who has had stints as an assistant at Notre Dame and Penn State. “I had very high regard for [the NESCAC] so when this opportunity opened up, I felt like this could be a good fit.”

Ndlovu started playing soccer as a boy. He grew up in Bulawayo in southwestern Zimbabwe.

“I was a very committed athlete, but my parents said, ‘You are continuing in school,’” he said. “I would play with my club team when I could, which is unusual – my parents said if you keep these grades, you can play club.

“The kids who were really serious about being professional as football players, they were training in the morning and the afternoon. I could only train in the afternoon after school. It really put me in a good position for U.S. colleges. I didn’t know anything about college, or scholarships or financial aid. It was something that wasn’t even a thought for me.” 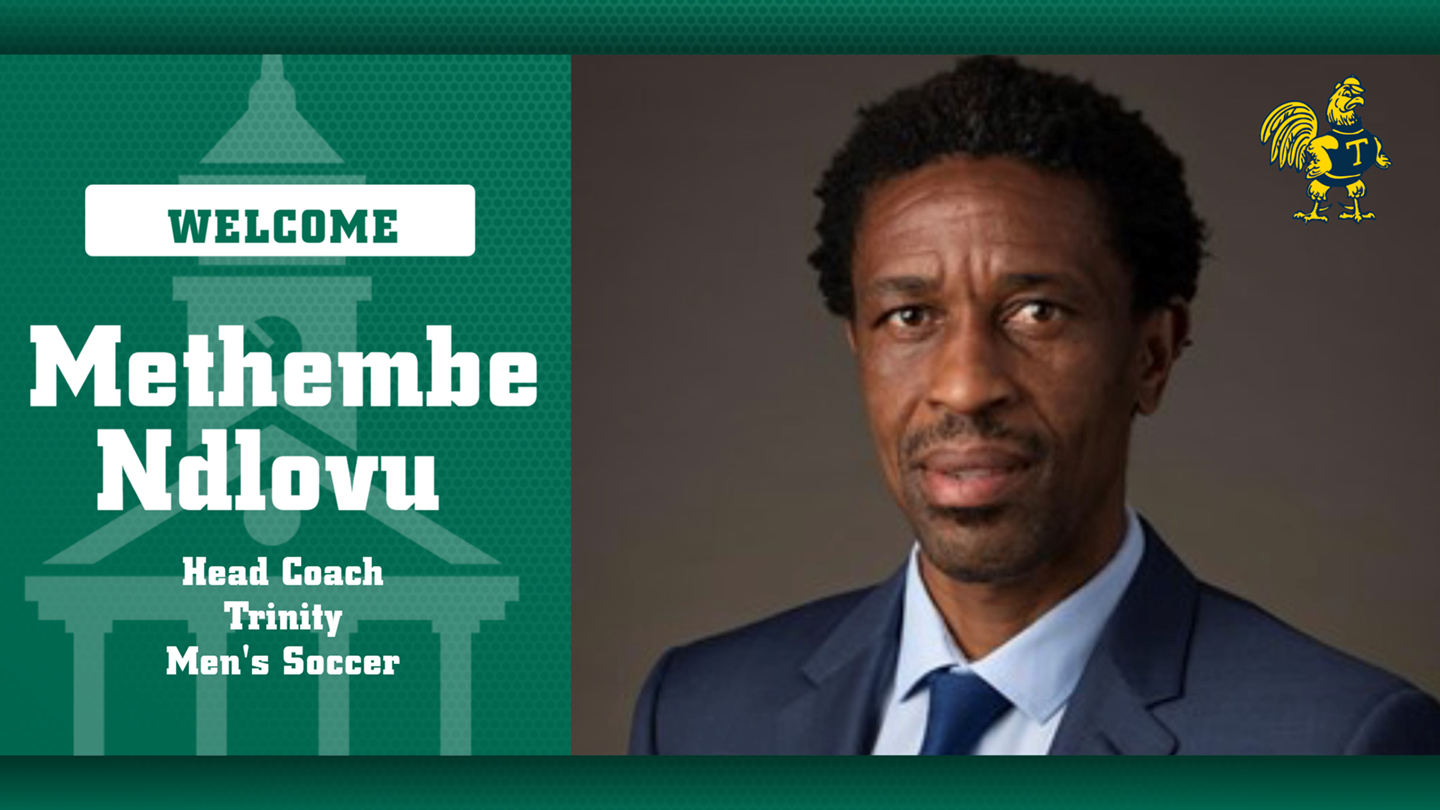 That is, until somebody from Dartmouth came to one of his practices. A man was teaching English at a local school and came to watch the club team play and asked to speak to Ndlovu, whom the coaches pointed out as a good student.

“He went back to the U.S and started sending me SAT prep stuff,” Ndlovu said. “It was totally random.

“This is why I say I’m one of the luckiest people. A year later, another person came on the same kind of exchange thing to teach so I developed a connection with the school and with the coach and prepared for the SATs and a couple of years later, I was in Hanover N.H.”

Ndlovu got off the plane at Logan Airport, not knowing anyone in the U.S. An assistant coach named John O’Connor was there to welcome him with a sign with his name on it. In a full circle kind of moment, on Oct. 16, Trinity will play Castleton (Vt.) University, whereO’Connor is now coaching.

Ndlovu always assumed he would play professionally then become a teacher. But as he watched his college coach, Bobby Clark (who went on to win a national championship at Notre Dame in 2013), he realized once again he could do both.

“Being exposed to the whole college atmosphere in the U.S., it kind of started to plant an idea in my head you could actually teach soccer for a living, this could be a career,” he said.

He did play, for the Zimbabwe national team and in the U.S. for a professional team on Cape Cod. He got the chance, for 2 ½ years, to coach his favorite childhood team, the Highlanders, and they won the Zimbabwean national title.

He also was the co-founder of a program called Grassroots Soccer, which sought to educate youngsters in Zimbabwe about AIDS and HIV using soccer as a vehicle. Zimbabwe has the fifth-highest HIV rate in the world.

“It’s a subject that can be difficult to talk to with young people so soccer was just a tool for engagement,” he said. “I’m still involved. When I moved here, I had become Africa’s CEO. I was looking after programs in Zimbabwe, Zambia and South Africa for Grassroots so when I left, I transitioned onto the board. And I just stepped down from the board this year, but I still remain involved behind the scenes.

“Our mission is to save lives. We have graduated more than a million adolescents in 22 different countries since 2002. This means a lot of young people have gone through our programs and graduated and received life-saving information.”

“We want to improve every day,” he said. “And at the end of the season we’ll finish where we belong. But what we want to do is work together as a group, on and off the field, with and without the ball, really be a team – if we take care of those little things, working together, playing properly, preparing properly for games, the results will take care of themselves.”