Mwaruwari’s dismissal comes after a difficult start to his tenure at the ambitious Premiership side.

He managed just three wins in his first 13 games in charge at the club.

Ngezi Platinum Stars are without a victory in their last four matches in the Premier Soccer League which has resulted in a slump to ninth position on 30 points from 22 matches.

The club’s leadership decided to fire Mwaruwari after his team lost 1-0 against Yadah at the National Sports Stadium on Saturday.

The Mhondoro-based club confirmed in a statement that the two parties had agreed to part ways and assistant coach Takesure Chiragwi has been appointed the club’s interim head coach. 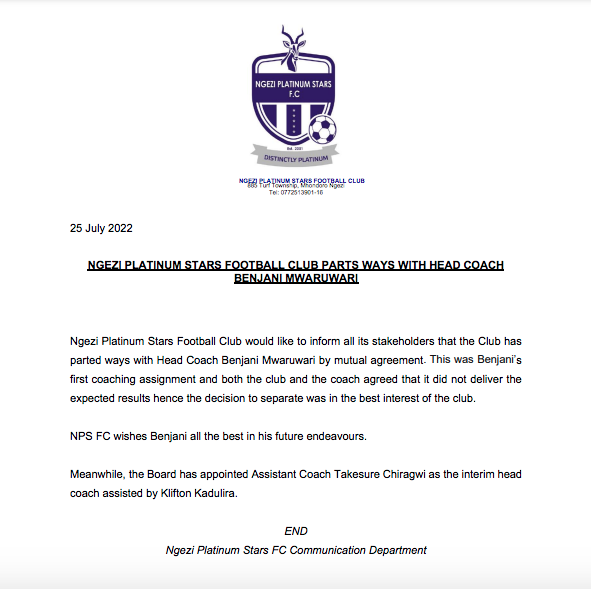 The former Warriors and Manchester City striker was appointed as head coach at Ngezi Platinum Stars in March to replace Rodwell Dhlakama.

He was assisted by Bongani Mafu as his first assistant and Takesure Chiragwi, who had been working as the team’s interim coach, as the second assistant. Former Warriors midfielder Tinashe Nengomasha was the team manager.

It is not clear if Mwaruwari’s backroom staff survived the axe.

The appointment at Ngezi was Mwaruwari’s first as head coach at a professional club since acquiring his coaching badges. The 43 year-old however endured a difficult start to his tenure at the club, managing just three wins and six draws in his first 13 matches in charge.

Despite promising to give Mwaruwari time to build a team capable of challenging for the Championship, the Mhondoro-based side has made the decision to fire Mwaruwari just after three months.