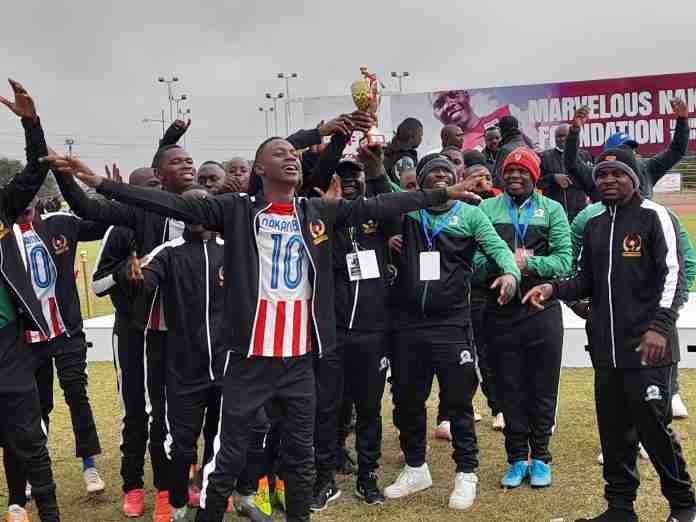 Warriors midfielder Marvelous says he will continue to support grassroots football development in the country through his foundation following the success of the inaugural Marvelous Nakamba Foundation National Under-17 which ended on Sunday in Bulawayo.

Mutare-based academy, MAJESA were crowned the inaugural winners of the two-day youth football competition which was held at White City Stadium.

MAJESA beat Highlanders 2-1 in an exciting final that was played before an appreciative crowd that braved the chilly weather to witness some of the finest youth players in action.

Dynamos were disqualified after the first day of the competition for allegedly fielding over-aged players.

“Youth football development is the basis of success wherever you go and as such the MNF will continue to sponsor the national Under-17 tournament,” Nakamba said after the historic youth football tournament whose final was graced by a number of football legends and government officials including Justice, Legal and Parliamentary Affairs Minister Ziyambi Ziyambi.

“It was unfortunate there were some incidences of age cheating and as MNF we soundly condemn such acts.

“But, that will not deter us from our mission to uplift the youths through football,” said Nakamba.

The Warriors star, whose foundation also pays schools for over 1 000 students across the country confirmed that MNF Under-17 tournament will be an annual event.

“This is what I enjoy. I was a beneficiary of a sound junior development plan and as such I have to give the upcoming footballers a platform to showcase their talent and possibly attract the attention of scouts.

“So, the idea is to do this tournament every year and also spread it to all corners of the country.

“I will continue doing this every time when I am on off-season because I belong here in Zimbabwe.

“All the people who attended this event are my people,” he said.

The Aston Villa player also revealed that his foundation is also planning to host a girls’ football tournament in November.

“It’s all in the pipeline. We also need to cater for the girl child and give her equal opportunities,” said Nakamba.