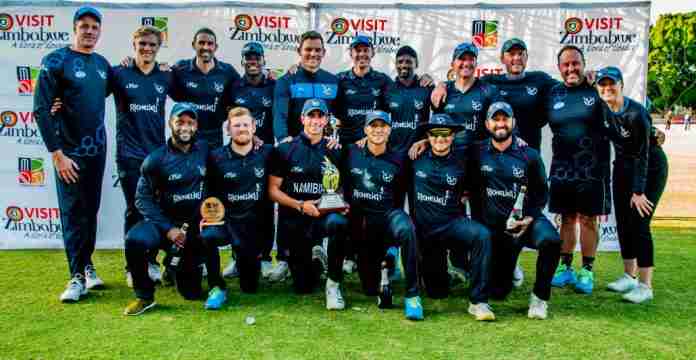 Tuesday’s 32-run win over the hosts in Bulawayo gave Namibia their first ever T20 series win over a full member of the International Cricket Council, with a 3-2 victory overall in the five-match series.

That landmark backs up the performances by the south-west Africans at the men’s T20 World Cup last year.

Namibia saw off the Netherlands and Ireland in qualifying, reached the Super 12s for the first time and beat Scotland in their first group game to secure a spot in the first round at the T20 World Cup in Australia later this year.

“Well done to Gerhard Erasmus, our head coach Pierre de Bruyn and every single player that contributed. To the young players – well done. We, as a nation, are incredibly proud of you.”

Van Vuuren, who represented his country at both the cricket and rugby union World Cups in 2003, has been president of Cricket Namibia since 2018.

“We are over the moon – this is something we will treasure for the rest of our lives and the team deserves this,” De Bruyn told the Cricket Namibia website. “It has taken a lot of work, strategies and planning to come beat a team like this. We are extremely proud of them.”

Cricket is on the rise in Namibia, with the country awarded joint hosting rights for the 50-over 2027 Cricket World Cup, along with neighbours South Africa and Zimbabwe.

“Cricket is on everybody’s lips and our vision is becoming more of a reality every time our national team performs,” Van Vuuren, 49, added.

“We continue this incredible journey we started four years ago. To our people behind the scenes – our chief executive and our staff and board members – well done for all the support.

“Enjoy the moment but there is a lot of hard work still to be done. Thank you also to Zimbabwe for hosting us. It is always great to play in our region and we hope we can do more of this.”