The 26-year-old who plays out of Dainfern Country Club in Johannesburg was one of the pre-tournament favourites for the title after an impressive season on the Altron Big Easy Tour where he has one victory and five top 10 finishes this season.

He certainly lived up to his billing with a solid round in perfect conditions around the picturesque Royal Harare Golf Club layout.

Wingate-based Miros Katembenuka and Zambia’s Sydney Wemba sit in a two-way tie for second place on the leaderboard after signing for identical rounds of two-under-par 70.

The gifted duo of Robson Chinhoi and Visitor Mapwanya are within touching distance of the lead after finishing the opening round tied on 71 while Bulawayo-based Ignatius Mketekete completes the top six following a level-par 72.

Rasheed Mohamed is the highest-placed amateur in the field after opening with a 73.

Defending champion Ben Follet-Smith is not featuring in the competition this year due to commitments on the Asian Tour.

A big field of 60 golfers are battling for honours in the HIV & Cancer Prevention Drive Pro-Am which is the first Order of Merit event on the Zimbabwe Professional Golfers Association (ZPGA) calendar.

The event which is sponsored by NAC is meant to raise funds towards HIV and Cancer prevention.

The sixth edition of the tournament comes hard on the heels of the Zimbabwe Ladies Open Strokeplay competition, held recently which was also sponsored by NAC. 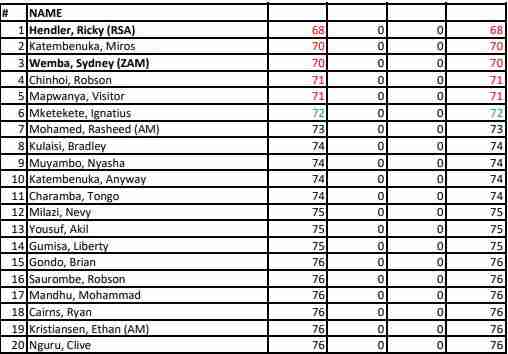