Nyamukondiwa carded a final round of nine-over-par 81 to finish with a 54-hole gross of 238, six shots clear of her national team teammate Primrose Chikwaya, who carded rounds of 82, 84 and 78 for a total of 244.

In the boys’ section where Verster held off a spirited challenge from home favourite Michael Wallace to clinch the coveted title.

Verster, a member of the Louis Oosthuizen Junior Golf Academy in Mossel Bay, Western Cape appeared to have given it away with two bogeys and a double-bogey from holes 15 to 17.

The gifted South African however held his nerve with a birdie on the final hole for a four-over-par 76 in the final round to finish on a 54-hole total of three-over-par 219.

He finished two shots clear of Wallace, who closed with a brilliant round of two-under-par 70 for a three-round total of five-over-par 221.

In-form Zimbabwean junior golfer, Keegan Shutt, who started the final round three shots off the lead settled for third position on the leaderboard on eight-under-par after carding a 78.

Sports and Recreation Commission chairman Gerald Mlotshwa, who was the guest of honour at the event applauded the Zimbabwe Junior Golf Association and First Capital Bank Zimbabwe for investing in grassroots structures in their pursuit to produce future champions.

“Tournaments of this nature involving international participants present local junior golfers with the necessary platform to showcase their talent and provide invaluable experience and exposure to the standard they must achieve to reach the world stage,” Mlotshwa said in his remarks.

“The development of competitive structures at junior levels in all sports is of vital importance to the development and sustainability of that particular discipline. Junior structures provide the foundation from which the sport grows,” he added. 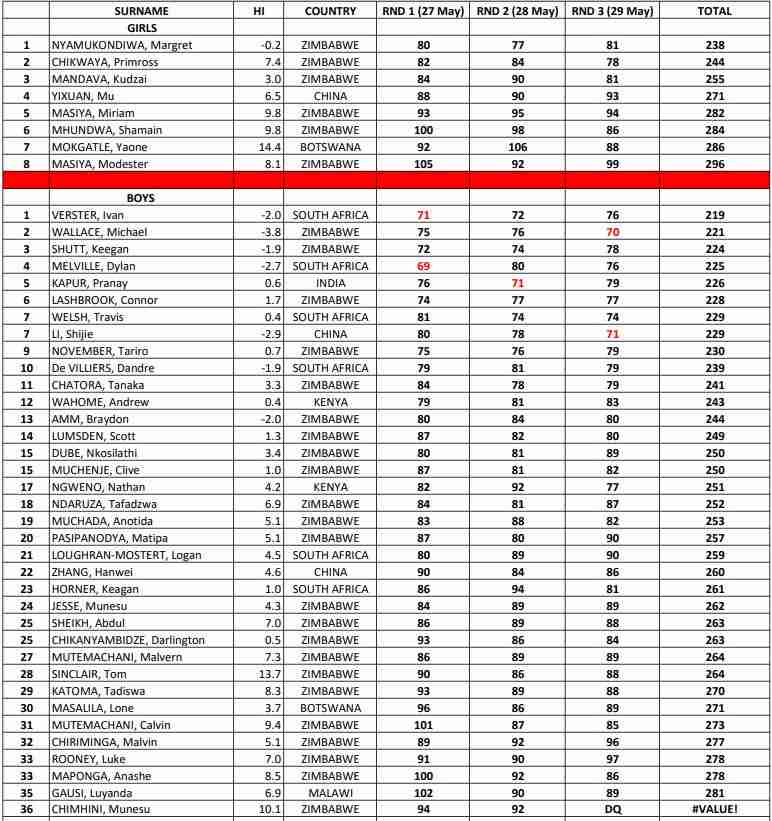