The multi-talented Churchill High School progidy is the only uncapped player in the Zimbabwe team, nicknamed the Cheetahs which will represent the nation in the Dubai tourney which will be played from December 1 to 3.

The Dubai Invitational Sevens competition will be played concurrently with the opening leg of the HSBC World Sevens Series, which features the world’s leading sevens sides.

The Dubai Sevens is Mandaza’s first senior call-up, in both formats of the game, in a staggering rise from schoolboy star to the international arena in barely a few months.

Junior Sables head coach De Souza is convinced he has got what it takes to make a mark at senior international level after also making a mark for Zimbabwe’s Under-20 team that was crowned African champions in Kenya in April in the premier format of the game.

“Shadreck is a player with a great rugby IQ who is committed and very hard working. His currently a Rugby Africa U-20 Barthes Trophy champion and has been a pillar for Pitbulls in both 15s and 7s under Geoff Madhake,” De Souza said of the youngster in an exclusive interview with ZimSportLive.

“I’m very happy for his call up into the Cheetahs team traveling for the Dubai 7s. It’s great to see youngsters get opportunities. It’s not going to be easy but at least the Sevens process has begun,” he said.

Mandaza joins fellow young starlets Edward Sigauke and Alex Nyamunda, who have also recently elevated to the Cheetahs on the back of their sterling performances for the country’s age group teams.

De Souza, who has already started building a squad for next year’s  World Rugby Under-20 Trophy tournament which will be hosted in Spain said he is delighted to see more youngsters being given the opportunity to showcase their talent at senior level.

“I’m really glad to see three Under-20s in the (Cheetahs) set-up, Alex Nyamunda Edward Sigauke and Shadreck Mandaza. I hope they get game time as the new crop in Graham Kaulback’s next cycle of players. We should back the process let the youngsters grow and develop at that level and we can only get better the more they play 15s and 7s the better for our rugby as a country,” added De Souza.

Mandaza began his schooling at Prince Edward on a government bursary before circumstances beyond his control resulted in him moving to Churchill, his father’s workplace.

In addition to being a gifted rugby player, Mandaza is also an explosive batsman in cricket, and in September he was voted best batsman at the CABS St George’s College T20 Festival in Harare.

Mandaza however appears to have set his sights on a rugby career, for now and will be eager to make the most of his opportunity at the Dubai Sevens Invitational.

The Cheetahs are in Pool A of the Dubai Sevens Invitational alongside Ireland, French sides Militaire and Fantastics.

Germany, who beat Zimbabwe in the final of the Zambezi Challenge will also feature in the Dubai event while Australia-based Zimbabwean rugby star Connor Pritchard will be part of the Bull Sharks side. 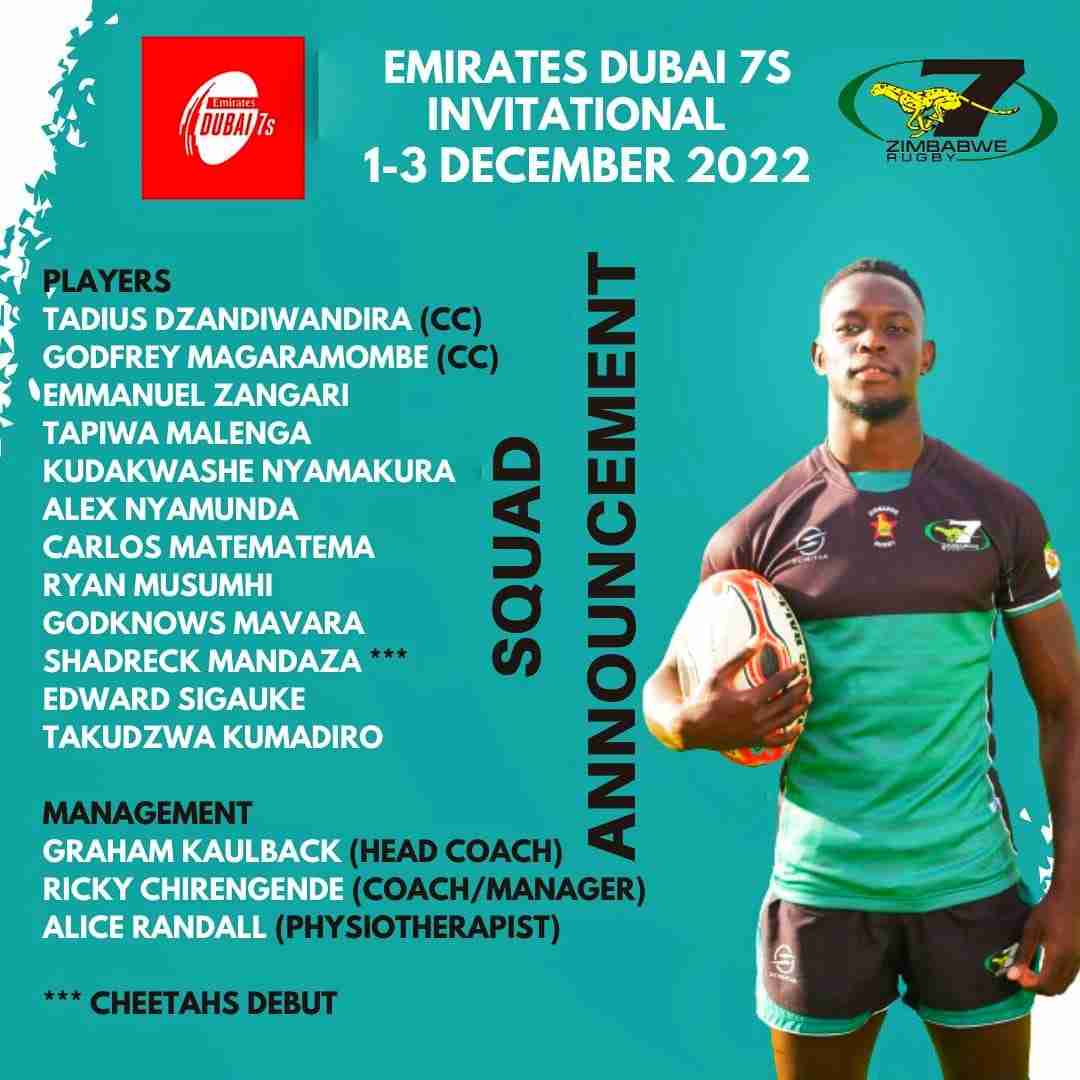