Kent – England-based cricket prodigy Tawanda Muyeye will focus on enjoying the moment with for English County cricket side Kent this season.

Highly-rated Muyeye, Wisden Schools Cricketer of the Year for 2020, signed last March, amid plenty of interest.

The Zimbabwe-born batter, a refugee who qualifies as a domestic player, played first-team cricket for Kent in the County Championship and the Royal London One-Day Cup in 2021 – but wants to have “more fun” this summer as Kent start their campaign away to Essex this Thursday.

He revealed: “Personally, honestly, this year I’ve decided not to set any goals for myself – just enjoy the moment and have fun.

“Last year, I didn’t have fun. For me, I think the goal is to have fun. Whatever I play, I play.

“Whenever I can play, whenever I can fill in – if I do well – I do well. If I don’t do well, I’ve still got another couple of years to learn (he joined on a three-year contract).

“I’m not too fussed about personal goals. I just want the team to win this year. I just want us to win and I’ll play my role whenever I can.

“Obviously, there is competition for places now because we have probably got a stronger squad this year but that’s always healthy, especially for young guys like me who can learn from the older guys.

“I think that goes for everyone – no matter how old you are. Try and learn, and don’t get too down about competition. If you are not playing, just try and get better every week.

“The competition is quite healthy and I think the main aim is for the team to win.”

Having moved to the UK, the 21-year-old became a sport scholar at Eastbourne College, where he worked with former Kent spinners Rob Ferley and James Tredwell. He broke two scoring records in his first year. 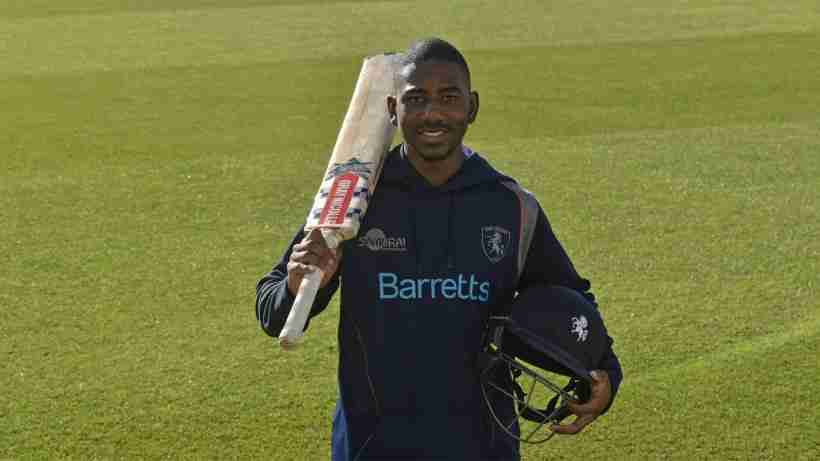 He blasted 1,112 runs at an average of 69.50 for the season, with 56 sixes. He also scored two double hundreds, his second coming from only 135 deliveries.

On his background, Muyeye, also a useful off-spinner, explained: “Basically, I finished my A-Levels here but my family are refugees.

“We came over in 2018-ish. I finished school at Eastbourne and then played a little bit at Sussex, and it didn’t work out there.

“Then I ended up at Kent last year – and it’s probably the best decision I ever made, joining.

“My family live in Kent as well, so that was one of the deciding factors of coming to Kent. I have made some friends.

“The team is diverse but everyone gets on and we look after each other as well as we can. I think that’s been important for me.”

Kent have plenty to build on going into the new campaign. They will be defending their T20 Blast title, having also won Division 3 of the County Championship.

“Pre-season has gone pretty well,” he commented. “It’s tough at the start – gyming and running, but it’s quite nice now that we are outside.

“It’s a bit more realistic now and I think everyone is pretty excited and raring to go.

“It’s been an enjoyable couple of months and I think everyone is in a good space. Hopefully, we can carry it on.”

Muyeye also says he has learnt a lot already at Kent – both from working with head coach Matt Walker and the rest of the county’s backroom staff, as well as some of the senior players.

Kent began pre-season training outside at the start of last month as they used a temperature-controlled marquee at The Spitfire Ground, St Lawrence, in Canterbury.

On the standard of the sessions, he said: “It’s been pretty intense at the moment, actually, with all the bowlers fit.

“Last winter, I think they weren’t fit for pre-season. So having the bowlers fit now has been quite helpful.

“It’s pretty intense – and a good battle – between bowlers and batters.”

Right-handed Muyeye’s top-score for Kent was 89 in their two-wicket County Championship success against Middlesex in the last match of the season.