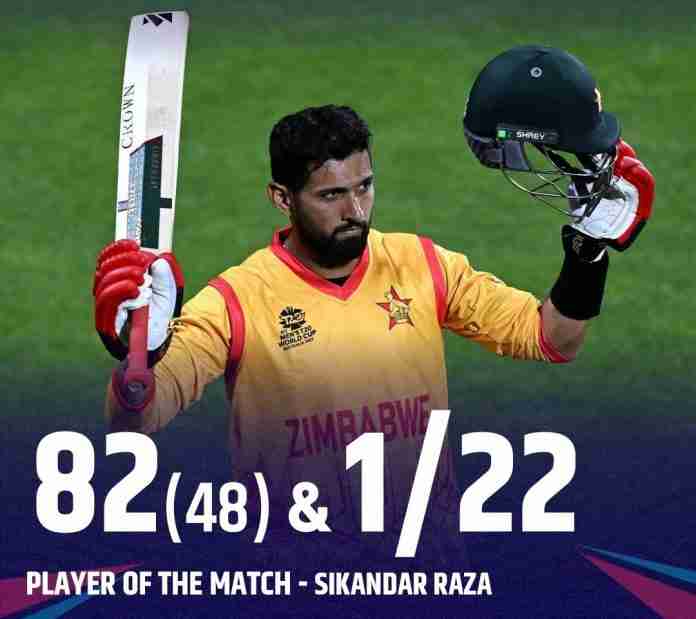 Zimbabwe’s match-winner against Ireland, Sikandar Raza was delighted with his team’s sensational victory over Ireland in Hobart on Monday, but the in-form allrounder is fully aware of the team’s main goal to get to the Super-12 stage of the ongoing ICC Men’s T20 World Cup.

Raza was adjudged the player of the match for his knock of 82 runs in just 48 balls that guided Zimbabwe to a 31-run win over the Irish in Hobart.

Speaking after the match, the all-rounder said the Zimbabwe team isn’t at the tournament just to make the numbers but to advance to the Super-12 stage and face some big teams.

“When we qualified, as much as we were happy to be here, we knew that our journey is not done. We didn’t just come here because we are happy to be representing Zimbabwe. The goal we brought was to get into the Super 12 and take some of the big teams and see where we go,” said Raza.

“So to have this victory today is certainly humbling, exciting and {I’m) happy as well. But for me, once the team chat is done, I wouldn’t be celebrating this victory. It’s done, it’s in the past. We have a very tough game against the Caribbean boys in 48 hours’ time and that’s what I’m looking forward to now.”

Commenting about his great run of form in 2022, Raza said all he tries to do differently is channel his emotions the right way.

“There is no secret to be honest. The only secret I can tell you is to try to channel all the emotions of success and failure into the right way and try to compete with the best in the world so we can represent Zimbabweans and put our flag among the best in the world,” said Raza.

The Pakistan-born allrounder also paid tribute to the impact coach Dave Houghton has had since returning to the Zimbabwean national team fold in July. Houghton took over the reins from Lalchand Rajput, who was appointed the team’s technical director.

“I think we have a very good squad. We’ve got a very diverse squad that’s actually gelling really well. I would say again the credit really goes to David, how he looked after individual needs, what needs to be done individually. And then he understands each and every individual player and brings us together. And I think that has been our strength and that’s why we’re gelling really well,” Raza said.

“David has made a massive difference since he’s taken over. David understands the players and given us the freedom and brought a long list. I thought those top two, the fact that there’s a lot of respect from the coaches and players, all those things he’s allowed us to bloom and basically play with responsibility and freedom. I think the credit goes to David.”

But there was a further surprise on Monday with Scotland also beating former two-time T20 World Cup champions West Indies by 42 runs.

The Scots posted 160/5 before bundling out the West Indies for just 118.

Zimbabwe face the wounded West Indies in their next game on Wednesday before finishing their campaign in the first round against Scotland on Friday.