Two straight major tournament wins right before making the trip to Scotland for the R&A Junior Open Championship is about the biggest confidence boost imaginable.

Chapman Golf Club sensation Keegan Shutt certainly has the most momentum heading into next week’s R&A Junior Open Championship to be played at Monifieth Golf Links in Scotland from July 10 to 13.

After picking up a dominant 13-shot victory at the Midland Amateur Championship at Kwekwe Golf Club just over a week ago, Shutt backed it up with another win Sunday at the prestigious Zimbabwe Amateur Golf Championship at Triangle and Hippo Valley Golf Clubs.

The 15-year-old, who has been in scintillating form this season carded scores of 71, 74, 71 and 75 for a tournament total of three-over-par 288 to secure his fourth overall title on the Zimbabwe Golf Association (ZGA) amateur circuit this season.

Royal Harare Golf Club-based top amateur Michael Wallace and Harare Country Club’s Clifford Sibanda finished tied for six shots behind Shutt, who was yet again in a class of his own.

Wallace, who has three wins of his own on the local amateur circuit this season in addition to a runner-up finish at the Africa Junior Golf Challenge in Egypt carded rounds of 75, 75, 71 and 76 for a tournament gross of 297.

Sibanda recovered from an opening 79 to return scores of 75, 69 and 74 in the final 54 holes to justify why is he rated amongst the top amateur golfers in the country.

Stallion Daka, one of the six Zambian players to make the trip to the Lowveld for the Zimbabwe Amateur Championship finished in third position on a tournament gross of 300 while gifted junior golfer Tariro November was one stroke back in fifth position.

A big field of 51 plays drawn from golf clubs around Zimbabwe and neighbouring Zambia made the trip to the Lowveld to take part in the country’s flagship amateur golf tournament.

The tournament also provided local players with an opportunity to earn ZGA Order of Merit points which will be used to select the Zimbabwe team for this year’s 2022 World Amateur Team Championships.

Hosted by the French Golf Federation, the World Amateur Team Championships, which is also known as the Eisenhower Trophy will be played from August 31 to September 3.

The 72-hole stroke play tournament, where the best two scores out of three count each day, will be staged at two highly venues in France: The Albatross Course at Le Golf National – home to the French Open, the 2018 Ryder Cup and the 2024 Olympic Games Paris course – and the Red Course at Le Golf Saint-Nom-la-Brèteche, which hosted the Trophée Lancôme from 1970-2003 and the French Open from 1965-1969. 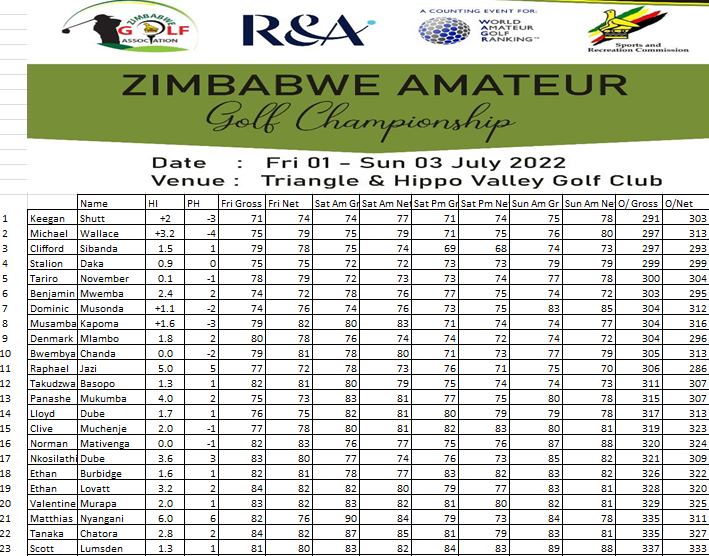