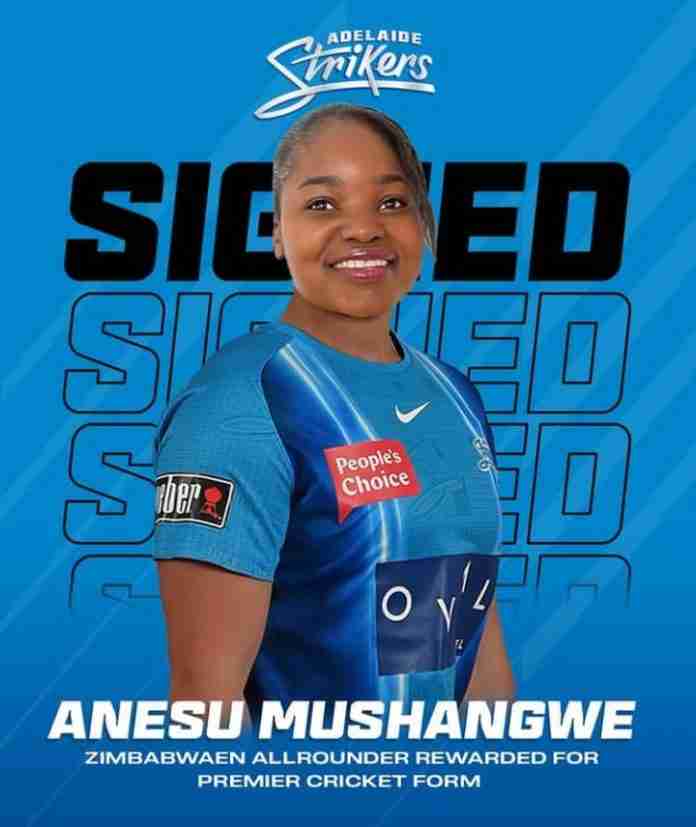 Lady Chevrons all-rounder Anesu Mushangwe is set to become the first Zimbabwean player to feature in the Women’s Big Bash League after being signed up by the Adelaide Strikers for this year’s edition of Australia’s premier women’s domestic Twenty20 cricket competition.

Mushangwe, a leg-spinner and talented batter is one of two additions to the Strikers’ squad announced yesterday, alongside emerging fast bowler Ella Wilson.

The 26-year-old has established herself as a force to be reckoned with playing for Glenelg in South Australian Premier Cricket since she arrived in Australia in 2019 and was named in last season’s premier team of the year.
Mushangwe has also played 21 T20Is for Zimbabwe, taking 33 wickets, and returned to international duties earlier this year after a three-year hiatus, where she was the leading wicket-taker in a tri-series against Namibia and Uganda.

“Anesu is a leg-spinner who is very well-suited to T20 cricket,” Strikers assistant coach Jude Coleman said.
“A different kind of leg-spinner to Amanda-Jade Wellington, I think she will challenge the best batters in the competition.”
The Strikers had already filled their quota of international marquee players for WBBL|08, with three Australia contracted players in Tahlia McGrath, Megan Schutt and Darcie Brown joined by West Indian Deandra Dottin and South Africa’s Laura Wolvaardt.
However, Mushangwe has been approved to be contracted as a local player given she is now an Australian resident, similar to Melbourne Stars’ Irish all-rounder Kim Garth who will also play as a local this season.
“I am very grateful for this opportunity, it is a dream come true to be a part of the squad,” Mushangwe said.
“I am very excited to see how things go this season. I will be playing with and against some of the best players in the world and it will be great to see where I am at with my game.”
Wilson, a candidate for Australia’s Under-19 T20 World Cup squad, is a fiery fast bowler and middle-order batter who was called into the Strikers’ squad early last season as a local replacement player, but has yet to make her WBBL debut.
After captaining South Australia’s U19s at last summer’s national championships, she was rewarded with her first senior state contract.
“We are excited to welcome Ella back for WBBL|08 after she had a taste of the WBBL last year,” Coleman added.
“Ella is an exciting young, talented all-rounder who bowls with good pace and swing and can also take the game on with the bat (and) also one of the best fielders I have seen some out of a youth program for many years.”