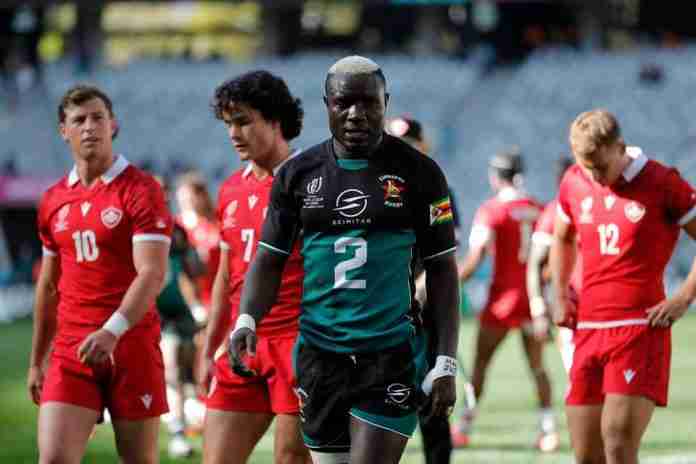 Zimbabwe failed to get past the first hurdle after defeat against higher ranked Canada as the 2022 Rugby World Cup Sevens got underway in Cape Town on Friday.

The Zimbabwe side which is affectionately known as the Cheetahs  fell to the Canadian side 31-07 in a Pre-Round of 16 at the Cape Town International Stadium.
Ryan Magaramombe handed the Cheetahs a dream start when he crossed over right down in the middle as early as the opening minute before Ryan Musumhi split the uprights with a close-range conversion.
But the Cheetahs failed to build from that early start, with Alex Russel and Anton Ngongo scoring two quick converted tries for Canada to lead 14-07 at halftime.
From restart, Russel crossed over for his second try before Jake Thiel added another for Canada.
It didn’t get any better for the Cheetahs’ towards the end with Ciaran Breen also touched down as the North Americans ran rampage.
The loss means for he Cheetahs drop to the Bowl Competition quarterfinals where they face Hong Kong. The Asian side also got their campaign off to a losing start following a 19-7 defeat against Uruguay.
The Cheetahs’ also lost their opening match at the 2018 Rugby World Cup Sevens in San Fransisco before finishing 23rd in the 24-team competition and coach Graham Kaulback and his charges will hope to get a better placement this time round despite his side missing out on a place in the Round of 16 where  Canada will face France.
Meanwhile Uganda will meet South Korea in the Bowl Quarterfinals after going down 33-7 to Samoa on Friday morning.